Doctor Who: The Movie 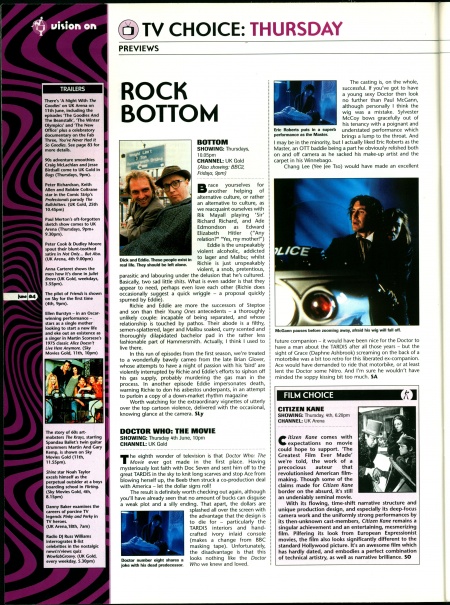 The eighth wonder of television is that Doctor Who: The Movie ever got made in the first place. Having mysteriously lost faith with Doc Seven and sent him off to the great TARDIS in the sky to knit long scarves and stop Ace from blowing herself up, the Beeb then struck a co-production deal with America — let the dollar signs roll!

The result is definitely worth checking out again, although you'll have already seen that no amount of bucks can disguise a weak plot and a silly ending. That apart, the dollars are splashed all over the screen with the advantage that the design is to die for — particularly the TARDIS interiors and handcrafted ivory inlaid console (makes a change from BBC masking tape). Unfortunately, the disadvantage is that this looks nothing like the Doctor joke with his dead predecessor. Who we knew and loved.

The casting is, on the whole, successful. If you've got to have a young sexy Doctor then look no further than Paul McGann, although personally I think the wig was a mistake. Sylvester McCoy bows gracefully out of his tenancy with a poignant and understated performance which brings a lump to the throat. And I may be in the minority, but I actually liked Eric Roberts as the Master, an OTT baddie being a part he obviously relished both on and off camera as he sacked his make-up artist and the carpet in his Winnebago.

Chang Lee (Yee Jee Tso) would have made an excellent future companion — it would have been nice for the Doctor to have a man about the TARDIS after all those years — but the sight of Grace (Daphne Ashbrook) screaming on the back of a motorbike was a bit too retro for this liberated ex-companion. Ace would have demanded to ride that motorbike, or at least lent the Doctor some Nitro. And I'm sure he wouldn't have minded the soppy kissing bit too much. SA

Caption: McGann pauses before zooming away, afraid his wig will fall off.