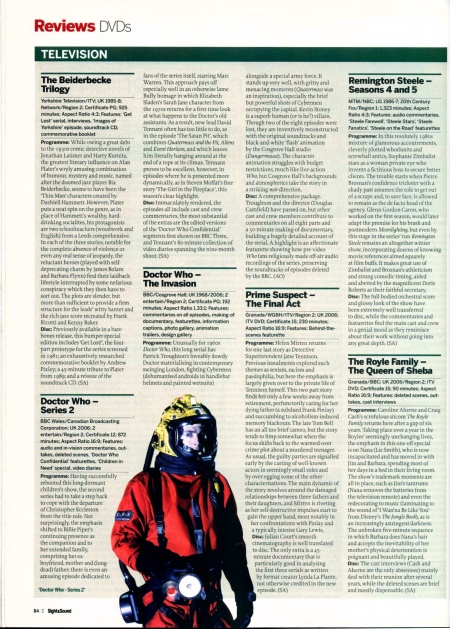 Programme: Having successfully rebooted this long-dormant children's show, the second series had to take a step back to cope with the departure of Christopher Eccleston from the title role. Not surprisingly, the emphasis shifted to Billie Piper's continuing presence as the companion and to her extended family, comprising her ex-boyfriend, mother and (long-dead) father; there is even an amusing episode dedicated to fans of the series itself, starring Marc Warren. This approach pays off especially well in an otherwise lame Buffy homage in which Elizabeth Sladen's Sarah Jane character from the 1970s returns for a first-time look at what happens to the Doctor's old assistants. As a result, new lead David Tennant often has too little to do, as in the episode 'The Satan Pit', which combines Quatermass and the Pit, Aliens and Event Horizon, and which leaves him literally hanging around at the end of a rope at its climax. Tennant proves to be excellent, however, in episodes where he is presented more dynamically, as in Steven Moffat's fine story 'The Girl in the Fireplace', this season's clear highlight.

Disc: Immaculately rendered, the episodes all include cast and crew commentaries, the most substantial of the extras are the edited versions of the 'Doctor Who Confidential' segments first shown on BBC Three, and Tennant's 80-minute collection of video diaries spanning the nine-month shoot.

Doctor Who — The Invasion

Programme: Unusually for 1960s Doctor Who, this long serial has Patrick Troughton's loveably dowdy Doctor materialising in contemporary swinging London, fighting Cybermen (dehumanised androids in handlebar helmets and painted wetsuits) alongside a special army force. It stands up very well, with gritty and menacing moments (Quatermass was an inspiration), especially the brief but powerful shots of Cybermen occupying the capital. Kevin Stoney is a superb human (or is he?) villain. Though two of the eight episodes were lost, they are inventively reconstructed with the original soundtracks and black-and-white 'flash' animation by the Cosgrove Hall studio (Dangermouse). The character animation struggles with budget restrictions, much like live-action Who, but Cosgrove Hall's backgrounds and atmospherics take the story in a striking noir direction.

Disc: A comprehensive package. Troughton and the director (Douglas Canfield) have passed on, but other cast and crew members contribute to commentaries on all eight parts and a so minute making-of documentary, building a hugely detailed account of the serial. A highlight is an affectionate featurette showing how pre-video Who fans religiously made off-air audio recordings of the series, preserving the soundtracks of episodes deleted by the BBC. (AO)