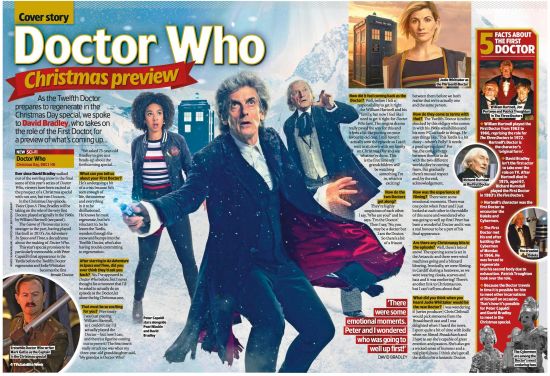 As the Twelfth Doctor prepares to regenerate in the Christmas Day special, we spoke to David Bradley, who takes on the role of the First Doctor, for a preview of what's coming up...

Ever since David Bradley walked out of the swirling snow in the final scene of this year's series of Doctor Who, viewers have been excited at the prospect of a Christmas special with not one, but two Doctors.

In the Christmas Day episode, Twice Upon A Time, Bradley will be taking on the role of the very first Doctor, played originally in the 1960s by William Hartnell (see panel).

The Game of Thrones star is no stranger to the part, having played Hartnell in 2013's An Adventure In Space and Time, a docudrama about the making of Doctor Who.

This year's special promises to be particularly memorable, with Peter Capaldi's final appearance in the Tardis before the Twelfth Doctor regenerates and Jodie Whittaker becomes the first female Doctor.

We asked 75-year-old Bradley to give us a heads-up about the forthcoming special...

What can you tell us about your First Doctor?

He's undergoing a bit of a crisis because he's seen enough of life, the universe and everything in it to be disillusioned.

He knows he must regenerate, but he's reluctant to. So he leaves the Tardis, wanders through the snow and bumps into the Twelfth Doctor, who's also having trouble committing to regeneration.

After starring in An Adventure in Space and Time, did you ever think they'd ask you back?

No. I've appeared in Doctor Who before, but I never thought for a moment that I'd be asked to actually do an episode as the Doctor, let alone the big Christmas one.

That must be so exciting for you?

Previously I was just playing William Hartnell, so I couldn't say I'd actually played the Doctor — but now I can, and there's a figurine coming out to prove it! The first time it really struck me was when my three-year-old granddaughter said, 'My grandpa is Doctor Who!'

How did it feel coming back as the Doctor?

Well, before I felt a responsibility to get it right for William Hartnell and his family, but now I feel like I need to get it right for Doctor Who fans. The origins drama really paved the way for this and it feels a bit like putting on your favourite old coat. I still haven't actually seen the episode so I can't wait to sit down with my family on Christmas Day and see what we've done. This is the first time my grandchildren will be watching something I'm in, which is exciting!

How do the two Doctors get along?

They're highly suspicious of each other. I say, Who are your and he says. 'I'm the Doctor: Then I say, No, you may be a doctor but I am the Doctor. So there's a bit of a frisson between them before we both realise that were actually one and the same person.

The Twelfth Doctor is rather shocked by this old guy who comes in with his 1960s sensibilities and his non-PC attitude to things. He says things like, This Tardis is a bit dusty — where's Polly? It needs a good spring clean!' For me, the comic energy between them is to do with the two different worlds they're coming from. But gradually there's mutual respect and, by the end, acknowledgement.

How was the experience of filming?

There were some emotional moments. There was one point when Peter and I just looked at each other in the middle of this scene and wondered who was going to well up first! Peter has been a wonderful Doctor and it was a real honour to be a part of his final appearance.

Are there any Christmassy bits in the episode?

Well, there's lots of snow! The opening scene is set in the Antarctic and there were wind machines going and a blizzard blowing. Ironically, we were filming in Cardiff during a heatwave, so we were wearing cloaks, scarves and hats and it was sweltering! There's another link to Christmas too, but I can't tell you about that!

What did you think when you heard Jodie Whittaker would be the new Doctor?

I was wondering if [series producer] Chris Chibnall would pick someone from the Broadchurch cast and I was delighted when I heard the news. I spent quite a bit of time with Jodie when we filmed Broadchurch and I have to say she's capable of great emotion and passion. She's also got a wicked sense of humour and a real playfulness. I think she's got all the skills to be a fantastic Doctor.

Jodie Whittaker as the Thirteenth Doctor

5 FACTS ABOUT THE FIRST DOCTOR

Richard Hurndall as the First Doctor

The Cybermen are among the Doctor's most enduring foes