Doctor Who From awkward boy to debonair man in an hour 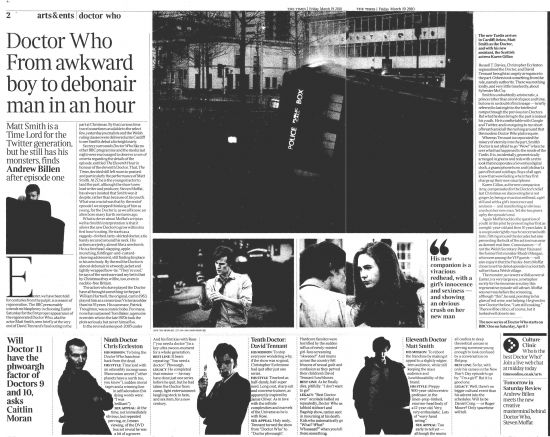 Matt Smith is a Time Lord for the Twitter generation, but he still has his monsters, finds Andrew Billen after episode one

Easter, we have been told for centuries from the pulpit, is a season of regeneration. The BBC presumably intends no blasphemy in choosing Easter Saturday for the first proper appearance of the regenerated Doctor Who, aka the actor Matt Smith, seen briefly at the very end of David Tennant's final outing in the part at Christmas. By that curious time travel sometimes available to the select few, yesterday journalists and the Welsh ruling classes were delivered unto Cardiff to see Smith's debut a fortnight early.

Secrecy surrounds Doctor Who like no other BBC programme and the media last night were encouraged to observe a vow of omerta regarding the details of the episode, entitled The Eleventh Hour in honour of the eleventh Doctor. That, The Times, decided still left room to praise it and particularly the performance of Matt Smith. At 27, he is the youngest actor to land the part, although the show's new lead writer and producer, Steven Moffat, has always insisted that Smith won it despite, rather than because of, his youth. What was crucial was that by the end of episodel we stopped thinking of him as young, for the Doctor is, as we all know, an alien born many Earth centuries ago.

What is clever about Moffat's script as well as Smith's interpretation is that it allows the new Doctor to grow within his first hour's outing. He starts as a raggedy-clothed, tatty-shirted doctor, a tie barely secured around his neck. His actions are jerky, almost like a newborn's. He is a forehead-slapping, apple-munching, fishfinger-and-custard-chewing adolescent, still finding his place in his new body. By the end the Doctor is almost debonair in a tweedy jacket and tightly wrapped bow-tie. "They're cool," he says of the neckware and my bet is that by Christmas they will be, too, even in necktie-free Britain.

The actors who have played the Doctor have all brought something to the part. William Hartnell, the original, cast in1963, played him as a censorious Victorian older than his 55 years. His successor, Patrick Troughton, was a cosmic hobo. For many, none has surpassed Tom Baker, a genuine eccentric who in the late1970s took the plots seriously but never himself so.

In the revived series post-2005 under Russell T. Davies, Christopher Eccleston regionalised the Doctor, and David Tennant brought an angsty arrogance to the part. Others took something from the role, namely authority. There was nothing lordly, and very little timelordly, about Sylvester McCoy.

Smith is undoubtedly aristocratic, a prince rather than a lord of space and time, but one in no doubt of his lineage — briefly referred to last night in the briefestof romps through the previous ten Doctors. But what he does bring to the part is indeed his youth. He is comfortable with Google and Twitter, and is not going to run short of breath amid all the rushing around that the modern Doctor Who plots require.

Whereas Tennant incorporated the misery of eternity into the part, Smith's Doctor is not afraid to go "Wow!" when he sees what has happened to the inside of the Tardis. It is, incidentally, geometrically arranged in greens and reds with a retro look that incoporates a Seventies digital clock, a gramophone horn and (oh dear) a pair of hot and cold taps. Boys of all ages know that wow feeling when they first charge up their new smartphone.

Karen Gillan, as the new companion Amy, compensates for the Doctor's relief last Christmas on discovering he is not ginger, by being a vivacious redhead, a girl still and with a girl's innocence and sexiness and manifesting an obvious crush on her new man. Yet she too grows up by the episode's end.

Again Moffat tackles the question of youth in this pilot by presenting her first as an eight-year-old and then 10 years later. It is an episode rightly much concerned with time, flitting around the decades but also presenting the bulk of the action in as near as dammit real time. Connoisseurs — if not the Welsh Secretary Peter Hain and the former first minister Rhodri Morgan, who were among the VIP guests—will also enjoy it that the Paisley-born Moffat chose to set his debut episode in a Scottish rather than a Welsh village.

The monster, as viewers will discover at Easter, is a very large eye, a metaphor surely for the immense scrutiny this regenerative episode will attract. Moffat was nervous before the screening, although "this", he said, pointing to his glass of red wine, was helping. He gives his new Doctor the line, "lam still cooking." There will be critics, of course, but it looked well done to me.

The new series of Doctor Who starts on BBC One on Saturday, April 3

Will Doctor 11 have the phwoargh factor of Doctors 9 and 10, asks Caitlin Moran

HIS MISSION: To bring the Doctor Who franchise back from the dead.

HIS STYLE: Time lord with an ostensibly incongruous Mancunian accent ("other planets have a north too, you know"), sudden moral rages and a winning line in self adoration (his dying words were: "I was brilliant").

SEX APPEAL: At the time, not immediately obvious, but repeated perving, er, I mean viewing, of the DVD box set reveal he was a bit of a grower.

And his first kiss with Rose ("you need a doctor") is a key ultra swoon-moment for a whole generation.

BEST LINE: It bears repeating: "You need a doctor." Phwoargh.

LEGACY: He completed that mission — he may have done just one series before he quit, but he had taken the Doctor from camp, light entertainment laughing stock to hero, and sex item, for a new century.

HIS MISSION: To stop everyone wondering why, if the show was so good, Christopher Ecclestone had quit after just one series.

HIS STYLE: Timelord as half-dandy, half-super nerd. Long coat, sharp suit and converse trainers, as apparently inspired by Jamie Oliver. As in love with the infinite complexities and marvels of the Universe as he is with Rose.

Hardcore fansites were horrified by the sudden influx of newly-minted girl-fans screaming "skweeee!" And mums across the country felt frissons of sexual guilt and confusion as they perved their children's David Tennant lunchboxes.

BEST LINE: As he finally dies, pitifully: "I don't want to go!"

LEGACY: "Best Doctor ever" accolade ladled on repeatedly, Doctor Who as tabloid stalwart and flagship show, nation sent in mourning at his death. Kids who automatically go "What? What? Whaaaaat?" when you tell them something.

HIS MISSION: To reboot the franchise by making it appeal to a slightly edgier, teen audience, while still keeping the mass audience and lunchboxability of the brand.

SEX APPEAL: Too early to tell yet — although the mums all confess to deep theoretical unease in perving someone young enough to look confused by a conversation on Britpop.

LEGACY: Well, there's no bigger cultural event than his advent into the schedules. Will he be Daniel Craig — or Roger Moore? Only spacetime will tell.

Culture Clinic Who is the best Doctor Who? Join a live web chat at midday today timesonline.co.uk/arts

Tomorrow in Saturday Review Andrew Billen meets the new creative mastermind behind Doctor Who, Steven Moffat The new Tardis arrives in Cardiff; below, Matt Smith as the Doctor, and with his new assistant, the Scottish actress Karen Gillan