Doctor Who Is Comin' to Town 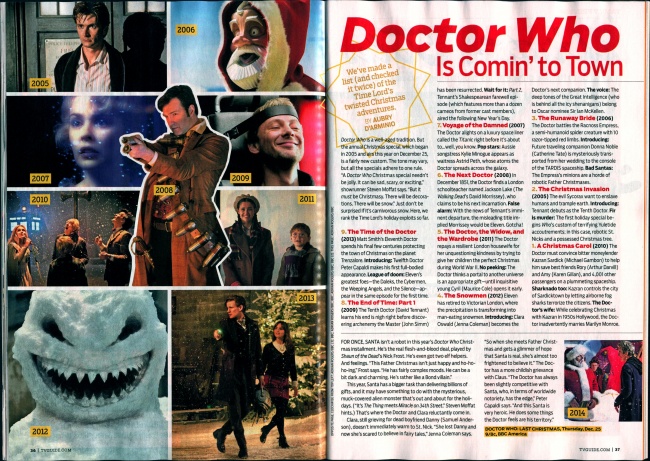 We've made a list (and checked it twice) of the Time Lord's twisted Christmas adventures.

Doctor Who is a well-aged tradition. But the annual Christmas special, which began in 2005 and airs this year on December 25, is a fairly new custom. The tone may vary, but all the specials adhere to one rule. "A Doctor Who Christmas special needn't be jolly. It can be sad, scary, or exciting," showrunner Steven Moffat says. "But it must be Christmasy. There will be decorations. There will be snow." Just don't be surprised if it's carnivorous snow. Here, we rank the Time Lord's holiday exploits so far.

The Time of the Doctor (2013) Matt Smith's Eleventh Doctor spends his final few centuries protecting the town of Christmas on the planet Trenzalore. Introducing: Twelfth Doctor Peter Capaldi makes his first full-bodied appearance. League of doom: Eleven's greatest foes—the Daleks, the Cybermen, the Weeping Angels, and the Silence—ap-pear in the same episode for the first time.

The End of Time: Part 1 (2009) The Tenth Doctor (David Tennant) learns his end is nigh right before discovering archenemy the Master (John Simm) has been resurrected. Wait for it: Part 2, Tennant's Shakespearean farewell episode (which features more than a dozen cameos from former cast members), aired the following New Year's Day. 7. Voyage of the Damned (2007) The Doctor alights on a luxury space liner called the Titanic right before it's about to...well, you know. Pop stars: Aussie songstress Kylie Minogue appears as waitress Astrid Peth, whose atoms the Doctor spreads across the galaxy.

The Next Doctor (2008) In December 1851, the Doctor finds a London schoolteacher named Jackson Lake (The Walking Dead's David Morrissey), who claims to be his next incarnation. False alarm: With the news of Tennant's imminent departure, the misleading title implied Morrissey would be Eleven. Gotcha!

The Doctor, the Widow, and the Wardrobe (2011) The Doctor repays a resilient London housewife for her unquestioning kindness by trying to give her children the perfect Christmas during World War II. No peeking: The Doctor thinks a portal to another universe is an appropriate gift—until inquisitive young Cyril (Maurice Cole) opens it early. 4. The Snowmen (2012) Eleven has retired to Victorian London, where the precipitation is transforming into man-eating snowmen. Introducing: Clara Oswald (Jenna Coleman) becomes the Doctor's next companion. The voice: The deep tones of the Great Intelligence (who is behind all the icy shenanigans) belong to Oscar nominee Sir Ian McKellen. 3. The Runaway Bride (2006) The Doctor battles the Racnoss Empress, a semi-humanoid spider creature with 10 razor-tipped red limbs. Introducing: Future traveling companion Donna Noble (Catherine Tate) is mysteriously transported from her wedding to the console of the TARDIS spaceship. Bad Santas: The Empress's minions are a horde of robotic Father Christmases.

The Christmas Invasion (2005) The evil Sycorax want to enslave humans and trample earth. Introducing: Tennant debuts as the Tenth Doctor. Fir is murder: The first holiday special begins Who's custom of terrifying Yuletide accoutrements; in this case, robotic St. Nicks and a possessed Christmas tree.

A Christmas Carol (2010) The Doctor must convince bitter moneylender Kazran Sardick (Michael Gambon) to help him save best friends Rory (Arthur Darvill) and Amy (Karen Gillan), and 4,001 other passengers on a plummeting spaceship. Sharknado too: Kazran controls the city of Sardicktown by letting airborne fog sharks terrorize the citizens. The Doctor's wife: While celebrating Christmas with Kazran in 1950s Hollywood, the Doctor inadvertently marries Marilyn Monroe.

FOR ONCE, SANTA isn't a robot in this year's Doctor Who Christmas installment. He's the real flesh-and-blood deal, played by Shaun of the Dead's Nick Frost. He's even got two elf helpers. And feelings. "This Father Christmas isn't just happy and ho-ho-ho-ing," Frost says. "He has fairly complex moods. He can be a bit dark and charming. He's rather like a Bond villain." This year, Santa has a bigger task than delivering billions of gifts, and it may have something to do with the mysterious, muck-covered alien monster that's out and about for the holidays. ("It's The Thing meets Miracle on 34th Street," Steven Moffat hints.) That's where the Doctor and Clara reluctantly come in. Clara, still grieving for dead boyfriend Danny (Samuel Anderson), doesn't immediately warm to St. Nick. "She lost Danny and now she's scared to believe in fairy tales," Jenna Coleman says.

"So when she meets Father Christmas and gets a glimmer of hope that Santa is real, she's almost too frightened to believe it." The Doctor has a more childish grievance with Claus. "The Doctor has always been slightly competitive with Santa, who, in terms of worldwide notoriety, has the edge," Peter Capaldi says. "And this Santa is very heroic. He does some things the Doctor feels are his territory."