Doctor Who Pops Up Again, This Time on Fox TV Movie 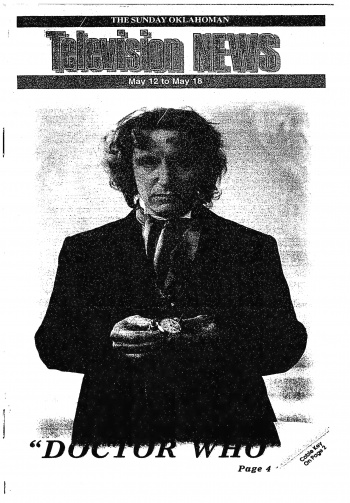 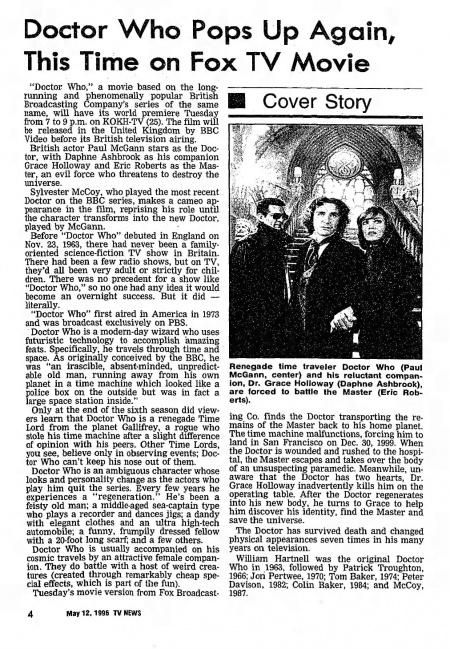 "Doctor Who," a movie based on the long-running and phenomenally popular British Broadcasting Company's series of the same name, will have its world premiere Tuesday from 7 to 9 p.m. on KOKH-TV (25). The film will be released in the United Kingdom by BBC Video before its British television airing.

British actor Paul McGann stars as the Doctor, with Daphne Ashbrook as his companion Grace Holloway and Eric Roberts as the Master, an evil force who threatens to destroy the universe.

Sylvester McCoy, who played the most recent Doctor on the BBC series, makes a cameo appearance in the film, reprising his role until the character transforms into the new Doctor, played by McGann.

Before "Doctor Who" debuted in England on Nov. 23, 1963, there had never been a family-oriented science-fiction TV show in Britain. There had been a few radio shows, but on TV, they'd all been very adult or strictly for children. There was no precedent for a show like "Doctor Who," so no one had any idea it would become an overnight success. But it did —literally.

"Doctor Who" first aired in America in 1973 and was broadcast exclusively on PBS.

Doctor Who is a modern-day wizard who uses futuristic technology to accomplish amazing feats. Specifically, he travels through time and space. As originally conceived by the BBC, he was "an irascible, absent-minded, unpredictable old man, running away from his own planet in a time machine which looked like a police box on the outside but was in fact a large space station inside."

Only at the end of the sixth season did viewers learn that Doctor Who is a renegade Time Lord from the planet Gallifrey, a rogue who stole his time machine after a slight difference of opinion with his peers. Other Time Lords, you see, believe only in observing events; Doctor Who can't keep his nose out of them.

Doctor Who is an ambiguous character whose looks and personality change as the actors who play him quit the series. Every few years he experiences a "regeneration. He's been a feisty old man; a middle-aged sea-captain type who plays a recorder and dances jigs; a dandy with elegant clothes and an ultra high-tech automobile; a funny, frumpily dressed fellow with a 20-foot long scarf; and a few others.

Doctor Who is usually accompanied on his cosmic travels by an attractive female companion. They do battle with a host of weird creatures (created through remarkably cheap special effects, which is part of the fun).

Tuesday's movie version from Fox Broadcasting Co. finds the Doctor transporting the remains of the Master back to his home planet. The time machine malfunctions, forcing him to land in San Francisco on Dec. 30, 1999. When the Doctor is wounded and rushed to the hospital, the Master escapes and takes over the body of an unsuspecting paramedic. Meanwhile, unaware that the Doctor has two hearts, Dr. Grace Holloway inadvertently kills him on the operating table. After the Doctor regenerates into his new body, he turns to Grace to help him discover his identity, find the Master and save the universe.

The Doctor has survived death and changed physical appearances seven times in his many years on television.