Doctor Who and the Mines of Terror 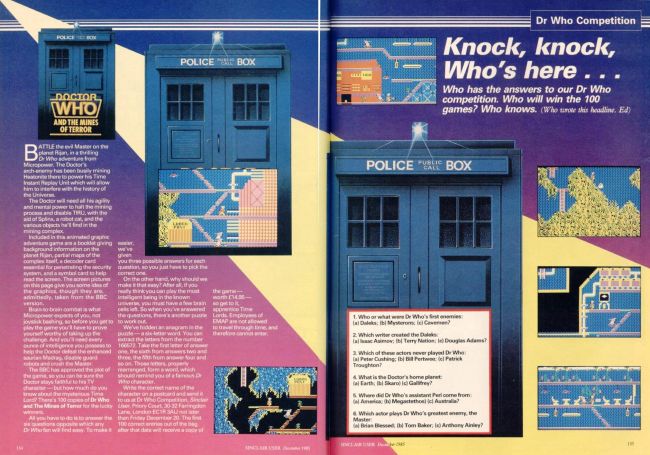 BATTLE the evil Master on the planet Rijan in a thrilling Dr Who adventure from Micropower. The Doctors arch-enemy has been busily mining Heatonite there to power his Time Instant Replay Unit which will allow him to interfere with the history of the Universe.

The Doctor will need bill his agility and mental power to halt the mining process and disable TIRU, with the aid of Splinx, a robot cat, and the various objects he'll find in the mining complex.

Included in this animated graphic adventure game are a booklet giving background information on the planet Rijan, partial maps of the complex itself, a decoder card essential for penetrating the security system, and a symbol card to help read the screen．The screen pictures on this page give you some idea of the graphics, though they are, admittedly, taken from the BBC version.

Brain-to-brain combat is what Micropower expects of you, not joystick bashing, so before you get to play the game you'll have to prove yourself worthy of taking up the challenge. And you'll need every ounce of intelligence you possess to help the Doctor defeat the enhanced saurian Madrag, disable guard robots and crush the Master.

The BBC has approved the plot of the game, so you can be sure the Doctor stays faithful to his character - but how much do you know about the mysterious Time Lord? There's 100 copies of Dr Who and The Mines of Terror for the lucky winners.

All you have to do is to answer the six questions opposite which any Dr Who fan will find easy. To make it easier, we've given you three possible answers for each question, so you just have to pick the correct one.

On the other hand, why should we make it that easy? After all, if you really think you can play the most intelligent being in the known universe, you must have a few brain cells left. So when you've answered the questions, there's another puzzle to work out.

We've hidden an anagram in the puzzle- a six-letter word．You can extract the letters from the number 166572. Take the first letter of answer one, the sixth from answers two and three, the fifth from answer four and so on．Those letters, properly rearranged, form a word, which should remind you of a famous Who character.

Write the correct name the character on a postcard and send it to us at Dr Who Competition, Sinclair User, Priory Court, 30-32 Farringdon Lane, London EC1R 3AU not later than Friday December 20. The first 100 correct entries out of the bag after that date will receive a copy of the game - worth £14.95 so get to it, apprentice Time Lords. Employees of EMAP are not allowed to travel through time, and therefore cannot enter.

Who has the answers to our Dr Who competition. Who will win the 100 games? Who knows. (Who wrote this headline. Ed.)

3. Which of these actors never played Dr Who: (a)Peter Cushing; (b} Bill Pertwee; (c}Patrick Troughton?

5. Where did Dr Who's assistant Peri come from: (a) America; (b} Megastethos (c) Australia?

6. Which actor plays Dr Who's greatest enemy, the Master: