Doctor Who can change the world with a sidekick and a satsuma. Why can't he become a she? 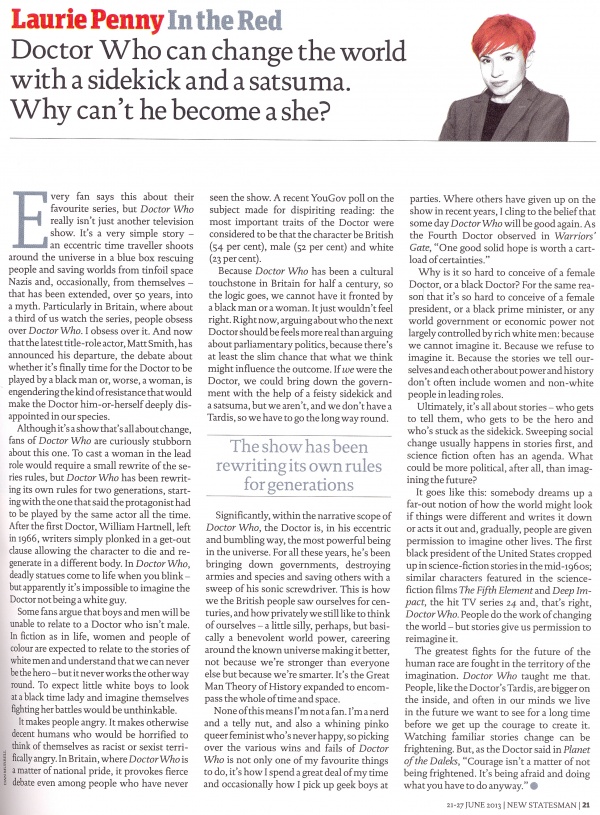 Every fan says this about their favourite series, but Doctor Who really isn't just another television show. It's a very simple story — an eccentric time traveller shoots around the universe in a blue box rescuing people and saving worlds from tinfoil space Nazis and, occasionally, from themselves — that has been extended, over 5o years, into a myth. Particularly in Britain, where about a third of us watch the series, people obsess over Doctor Who. I obsess over it. And now that the latest title-role actor, Matt Smith, has announced his departure, the debate about whether it's finally time for the Doctor to be played by a black man or, worse, a woman, is engendering the kind of resistance that would make the Doctor him-or-herself deeply disappointed in our species.

Although it's a show that's all about change, fans of Doctor Who are curiously stubborn about this one. To cast a woman in the lead role would require a small rewrite of the series rules, but Doctor Who has been rewriting its own rules for two generations, starting with the one that said the protagonist had to be played by the same actor all the time. After the first Doctor, William Hartnell, left in 1966, writers simply plonked in a get-out clause allowing the character to die and regenerate in a different body. In Doctor Who, deadly statues come to life when you blink — but apparently it's impossible to imagine the Doctor not being a white guy.

Some fans argue that boys and men will be unable to relate to a Doctor who isn't male. In fiction as in life, women and people of colour are expected to relate to the stories of white men and understand that we can never be the hero — but it never works the other way round. To expect little white boys to look at a black time lady and imagine themselves fighting her battles would be unthinkable.

It makes people angry. It makes otherwise decent humans who would be horrified to think of themselves as racist or sexist terrifically angry. In Britain, where Doctor Who is a matter of national pride, it provokes fierce debate even among people who have never seen the show. A recent YouGov poll on the subject made for dispiriting reading: the most important traits of the Doctor were considered to be that the character be British (54 per cent), male (52 per cent) and white (23 per cent).

Because Doctor Who has been a cultural touchstone in Britain for half a century, so the logic goes, we cannot have it fronted by a black man or a woman. It just wouldn't feel right. Right now, arguing about who the next Doctor should be feels more real than arguing about parliamentary politics, because there's at least the slim chance that what we think might influence the outcome. If we were the Doctor, we could bring down the government with the help of a feisty sidekick and a satsuma, but we aren't, and we don't have a Tardis, so we have to go the long way round.

Significantly, within the narrative scope of Doctor Who, the Doctor is, in his eccentric and bumbling way, the most powerful being in the universe. For all these years, he's been bringing down governments, destroying armies and species and saving others with a sweep of his sonic screwdriver. This is how we the British people saw ourselves for centuries, and how privately we still like to think of ourselves — a little silly, perhaps, but basically a benevolent world power, careering around the known universe making it better, not because we're stronger than everyone else but because we're smarter. It's the Great Man Theory of History expanded to encompass the whole of time and space.

None of this means I'm not a fan. I'm a nerd and a telly nut, and also a whining pinko queer feminist who's never happy, so picking over the various wins and fails of Doctor Who is not only one of my favourite things to do, it's how I spend a great deal of my time and occasionally how I pick up geek boys at parties. Where others have given up on the show in recent years, I cling to the belief that some day Doctor Who will be good again. As the Fourth Doctor observed in Warriors' Gate, "One good solid hope is worth a cart-load of certainties."

Why is it so hard to conceive of a female Doctor, or a black Doctor? For the same reason that it's so hard to conceive of a female president, or a black prime minister, or any world government or economic power not largely controlled by rich white men: because we cannot imagine it. Because we refuse to imagine it. Because the stories we tell ourselves and each other about power and history don't often include women and non-white people in leading roles.

Ultimately, it's all about stories — who gets to tell them, who gets to be the hero and who's stuck as the sidekick. Sweeping social change usually happens in stories first, and science fiction often has an agenda. What could be more political, after all, than imagining the future?

It goes like this: somebody dreams up a far-out notion of how the world might look if things were different and writes it down or acts it out and, gradually, people are given permission to imagine other lives. The first black president of the United States cropped up in science-fiction stories in the mid-196os; similar characters featured in the science-fiction films The Fifth Element and Deep Impact, the hit TV series 24 and, that's right, Doctor Who. People do the work of changing the world — but stories give us permission to reimagine it.

The greatest fights for the future of the human race are fought in the territory of the imagination. Doctor Who taught me that. People, like the Doctor's Tardis, are bigger on the inside, and often in our minds we live in the future we want to see for a long time before we get up the courage to create it. Watching familiar stories change can be frightening. But, as the Doctor said in Planet of the Daleks, "Courage isn't a matter of not being frightened. It's being afraid and doing what you have to do anyway."