Doctor Who fans celebrate 50 years of fun and adventure 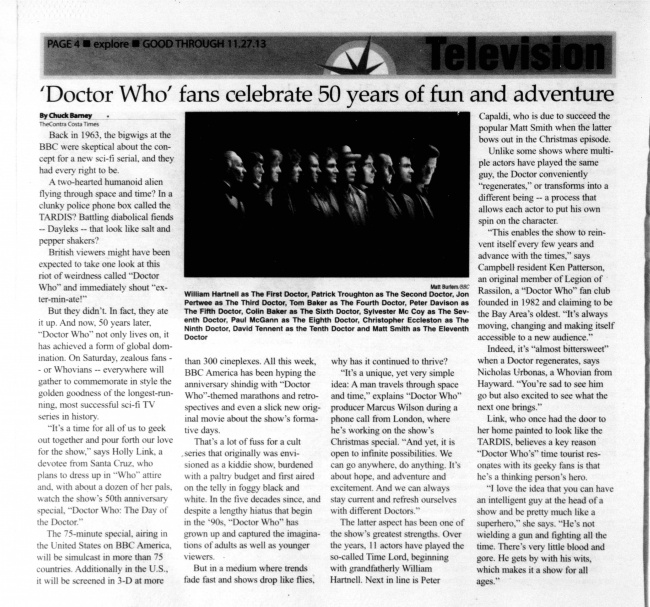 Back in 1963, the bigwigs at the BBC were skeptical about the concept for a new sci-fi serial, and they had every right to be.

A two-hearted humanoid alien flying through space and time? In a clunky police phone box called the TARDIS? Battling diabolical fiends — Dayleks — that look like salt and pepper shakers?

British viewers might have been expected to take one look at this riot of weirdness called "Doctor Who" and immediately shout "ex-ter-min-ate!"

But they didn't. In fact, they ate it up. And now, 50 years later, "Doctor Who" not only lives on, it has achieved a form of global domination. On Saturday, zealous fans -- or Whovians — everywhere will gather to commemorate in style the golden goodness of the longest-running, most successful sci-fi TV series in history.

"It's a time for all of us to geek out together and pour forth our love for the show," says Holly Link, a devotee from Santa Cruz, who plans to dress up in "Who" attire and, with about a dozen of her pals, watch the show's 50th anniversary special, "Doctor Who: The Day of the Doctor."

The 75-minute special, airing in the United States on BBC America, will be simulcast in more than 75 countries. Additionally in the U.S., it will be screened in 3-D at more than 300 cineplexes. All this 'N,' eek, BBC America has been hyping the anniversary shindig with "Doctor Who"-themed marathons and retrospectives and even a slick new original movie about the show's formative days.

That's a lot of fuss for a cult series that originally was envisioned as a kiddie show, burdened with a paltry budget and first aired on the telly in foggy black and white. In the five decades since, and despite a lengthy hiatus that begin in the '90s, "Doctor Who" has grown up and captured the imaginations of adults as well as younger viewers.

But in a medium where trends fade fast and shows drop like flies, why has it continued to thrive?

"It's a unique, yet very simple idea: A man travels through space and time," explains "Doctor Who" producer Marcus Wilson during a phone call from London, where he's working on the show's Christmas special. "And yet, it is open to infinite possibilities. We can go anywhere, do anything. It's about hope, and adventure and excitement. And we can always stay current and refresh ourselves with different Doctors."

The latter aspect has been one of the show's greatest strengths. Over the years, II actors have played the so-called Time Lord, beginning with grandfatherly William Hartnell. Next in line is Peter Capaldi, who is due to succeed the popular Matt Smith when the latter bows out in the Christmas episode.

Unlike some shows where multiple actors have played the same guy, the Doctor conveniently "regenerates," or transforms into a different being -- a process that allows each actor to put his own spin on the character.

"This enables the show to reinvent itself every few years and advance with the times," says Campbell resident Ken Patterson, an original member of Legion of Rassilon, a "Doctor Who" fan club founded in 1982 and claiming to be the Bay Area's oldest. "It's always moving, changing and making itself accessible to a new audience."

Indeed, it's "almost bittersweet" when a Doctor regenerates, says Nicholas Urbonas, a Whovian from Hayward. "You're sad to see him go but also excited to see what the next one brings."

Link, who once had the door to her home painted to look like the TARDIS, believes a key reason "Doctor Who's" time tourist resonates with its geeky fans is that he's a thinking person's hero.

"I love the idea that you can have an intelligent guy at the head of a show and be pretty much like a superhero," she says. "He's not wielding a gun and fighting all the time. There's very little blood and gore. He gets by with his wits, which makes it a show for all ages."