Doctor Who festival set for Tampa 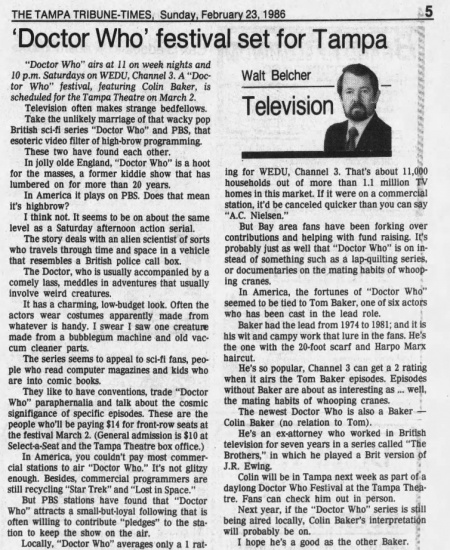 "Doctor Who" airs at 11 on week nights and 10 p.m. Saturdays on WEDU, Channel 3. A "Doctor Who" festival, featuring Colin Baker, is scheduled for the Tampa Theatre on March 2.

Take the unlikely marriage of that wacky pop British sci-fi series "Doctor Who" and PBS, that esoteric video filter of high-brow programming.

These two have found each other.

In jolly olde England, "Doctor Who" is a hoot for the masses, a former kiddie show that has lumbered on for more than 20 years.

In America it plays on PBS. Does that mean it's highbrow?

I think not. It seems to be on about the same level as a Saturday afternoon action serial.

The story deals with an alien scientist of sorts who travels through time and space in a vehicle that resembles a British police call box.

The Doctor, who is usually accompanied by a comely lass, meddles in adventures that usually involve weird creatures.

It has a charming, low-budget look. Often the actors wear costumes apparently made from whatever is handy. I swear I saw one creature made from a bubblegum machine and old vaccum cleaner parts.

The series seems to appeal to sci-fi fans, people who read computer magazines and kids who are into comic books.

They like to have conventions, trade "Doctor Who" paraphernalia and talk about the cosmic signifigance of specific episodes. These are the people who'll be paying $14 for front-row seats at the festival March 2. (General admission is $10 at Select-a-Seat and the Tampa Theatre box office.)

In America, you couldn't pay most commercial stations to air "Doctor Who." It's not glitzy enough. Besides, commercial programmers are still recycling "Star Trek" and "Lost in Space."

But PBS stations have found that "Doctor Who" attracts a small-but-loyal following that is often willing to contribute "pledges" to the station to keep the show on the air.

Locally, "Doctor Who" averages only a 1 rating for WEDU, Channel 3. That's about 11,000 households out of more than 1.1 million TV homes in this market. If it were on a commercial station, it'd be canceled quicker than you can say "A.C. Nielsen."

But Bay area fans have been forking over contributions and helping with fund raising. It's probably just as well that "Doctor Who" is on instead of something such as a lap-quilting series, or documentaries on the mating habits of whooping cranes.

In America, the fortunes of "Doctor Who" seemed to be tied to Tom Baker, one of six actors who has been cast in the lead role.

He's so popular, Channel 3 can get a 2 rating when it airs the Tom Baker episodes. Episodes without Baker are about as interesting as ... well, the mating habits of whooping cranes.

The newest Doctor Who is also a Baker — Colin Baker (no relation to Tom).

He's an ex-attorney who worked in British television for seven years in a series called "The Brothers," in which he played a Brit version of J.R. Ewing.

Colin will be in Tampa next week as part of a daylong Doctor Who Festival at the Tampa Theatre. Fans can check him out in person.

Next year, if the "Doctor Who" series is still being aired locally, Colin Baker's interpretation will probably be on.

I hope he's a good as the other Baker.