Doctor Who in the Flesh 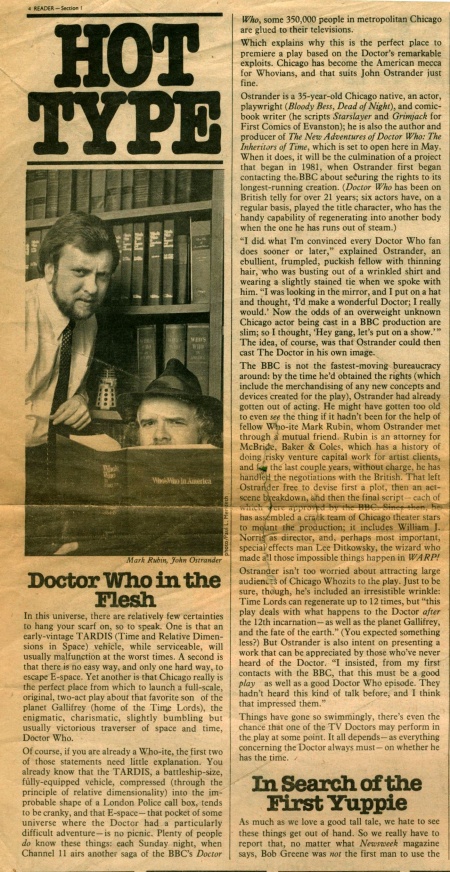 In this universe, there are relatively few certainties to hang your scarf on, so to speak. One is that an early-vintage TARDIS (Time and Relative Dimensions in Space) vehicle, while serviceable, will usually malfunction at the worst times. A second is that there is no easy way, and only one hard way, to escape E-space. Yet another is that Chicago really is the perfect place from which to launch a full-scale, original, two-act play about that favorite son of the planet Gallifrey (home of the Time Lords), the enigmatic, charismatic, slightly humbling but usually victorious traverser of space and time, Doctor Who.

Of course, if you are already a Who-ite, the first two of those statements need little explanation. You already know that the TARDIS, a battleship-size, fully-equipped vehicle, compressed (through the principle of relative dimensionality) into the improbable shape of a London Police call box, tends to he cranky, and that E-space— that pocket of some universe where the Doctor had a particularly difficult adventure—is no picnic. Plenty of people do know these things: each Sunday night, when Channel 11 airs another saga of the BBC's Doctor Who, some 350,000 people in metropolitan Chicago are glued to their televisions.

Which explains why this is the perfect place to premiere a play based on the Doctor's remarkable exploits. Chicago has become the American mecca for Whovians, and that suits John Ostrander just fine. Ostrander is a 35-year-old Chicago native, an actor, playwright (Bloody Bess, Dead of Night), and comic-book writer (he scripts Starslayer and Grimjack for First Comics of Evanston); he is also the author and producer of The New Adventures of Doctor Who: The Inheritors of Time, which is set to open here in May. When it does, it will be the culmination of a project that began in 1981, when Ostrander first began contacting the BBC about securing the rights to its longest-running creation. (Doctor Who has been on British telly for over 21 years; six actors have, on a regular basis, played the title character, who has the handy capability of regenerating into another body when the one he has runs out of steam.)

"I did what I'm convinced every Doctor Who fan does sooner or later," explained Ostrander, an ebullient, frumpled, puckish fellow with thinning hair, who was busting out of a wrinkled shirt and wearing a slightly stained tie when we spoke with him. "I was looking in the mirror, and I put on a hat and thought, 'I'd make a wonderful Doctor; I really would.' Now the odds of an overweight unknown Chicago actor being cast in a BBC production are slim; so I thought, 'Hey gang, let's put on a show.'" The idea, of course, was that Ostrander could then cast The Doctor in his own image.

The BBC is not the fastest-moving bureaucracy around: by the time he'd obtained the rights (which include the merchandising of any new concepts and devices created for the play), Ostrander had already gotten out of acting. He might have gotten too old to even see the thing if it hadn't been for the help of fellow Who-ite Mark Rubin, whom Ostrander met through a mutual friend. Rubin is an attorney for McBride, Baker & Coles, which has a history of doing risky venture capital work for artist clients, and for the last couple of years, without charge, he has handled the negotiations with the British. That left Ostrander free to devise first a plot, then an act-scene breakdown, and then the final script each of which were approved by the BBC. Since then, he has assembled a crack team of Chicago theater stars to mount the production; it includes William J. Norris as director, and, perhaps most important, special effects man Lee Dilkowsky, the wizard who made all those impossible things happen in WARP!

Ostrander isn't too worried about attracting large audiences of Chicago Whozits to the play. Just to be sure, though, he's included an irresistible wrinkle: Time Lords can regenerate up to 12 times, but "this play deals with what happens to the actor after the 12th incarnation--as well as the planet Gallifrey, and the fate of the earth." (You expected something less?) But Ostrander is also intent on presenting a work that can be appreciated by those who've never heard of the Doctor. "I insisted, from my first contacts with the BBC, that this must be a good play as well as a good Doctor Who episode. They hadn't heard this kind of talk before, and I think that impressed them."

Things have gone so swimmingly, there's even the chance that one of the TV Doctors may perform in the play at some point. It all depends—as everything concerning the Doctor always must — on whether he has the time.