Doctor Who is back to its campy roots 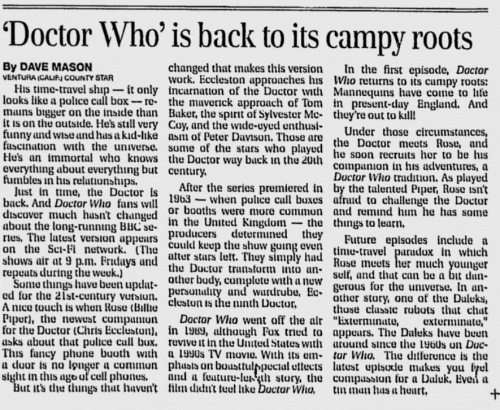 His time-travel ship — it only looks like a police call box — remains bigger on the inside than it is on the outside. He's still very funny wad wise and has a kid-like fascination with the universe. He's an immortal who knows everything about everything but fumbles in his relationships.

Just in time, the Doctor is back. And Doctor Who fans will discover much hasn't changed about the long-running BBC series. The latest version appears on the Sci-Fi network. (The shows air at 9 p.m. Fridays and repeats during the week.)

Some things have been updated for the 21st-century version. A nice touch is when Rose (Billie Piper), the newest companion for the Doctor (Chris Eccleston), asks about that police call box. This fancy phone booth with a door is no longer a common sight in this age of cell phones.

But it's the things that haven't changed that makes this version work. Eccleston approaches his incarnation of the Doctor with the maverick approach of Tom Baker, the spirit of Sylvester McCoy, and the wide-eyed enthusiasm of Peter Davison. Those are some of the stars who played the Doctor way back in the 20th century,

After the series premiered in 1963 — when police call boxes or booths were more common in the United Kingdom — the producers determined they could keep the show going even after stars left. They simply had the Doctor transform into another body, complete with a new personality and wardrobe, Eccleston is the ninth Doctor.

Doctor Who went off the air in 1899, although Fox tried to revive it in the United States with a 1990s TV movie. With its emphasis un boastful special effects and a feature-length story, the film didn't feel like Doctor Who.

In the first episode, Doctor Who returns to its campy roots: Mannequins have come to life in present-day England. And they're out to kill!

Under those circumstances, the Doctor meets Rose, and he soon recruits her to be his companion in his adventures, a Doctor Who tradition. As played by the talented Piper, Rose isn't afraid to challenge the Doctor and remind him he has sonic things to learn.

Future episodes include a time-travel paradox in which Rose meets her much younger self, and that can be a bit dangerous fur the universe. In another story, one of the Daleks, those classic robots that chat "Exterminate, exterminate," appears. The Daleks have been around since the 1960s on Doctor Who. The difference is the latest episode makes you feel compassion for a Dalek. Even a tin man has a heart.