Doctor Who is our hero 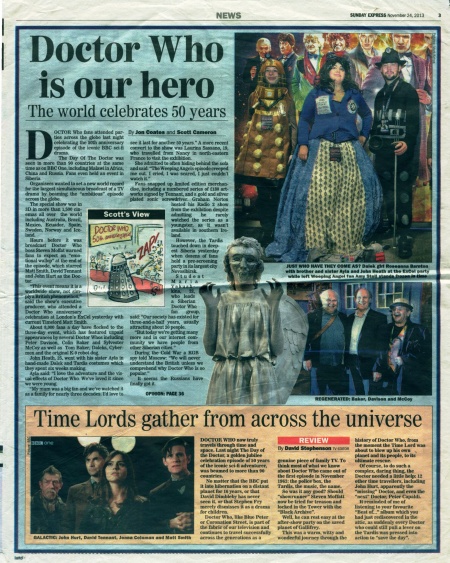 The Day Of The Doctor was seen in more than 90 countries at the same time as on BBC One, including Malawi in Africa, China and Russia. Fans even held an event in Siberia.

Organisers wanted to set a new world record for the largest simultaneous broadcast of a TV drama by beaming the "ambitious" episode across the globe.

The special show was in 3D in more than 1,500 cinemas all over the world including Australia, Brazil, Mexico, Ecuador, Spain, Sweden, Norway and Iceland.

Hours before it was broadcast Doctor Who boss Steven Moffat warned fans to expect an "emotional wallop" at the end of the episode, which starred Matt Smith, David Tennant and John Hurt as the Doctor.

"This event means it is a worldwide show, not simply a British phenomenon," said the show's executive producer, who attended a Doctor Who anniversary celebration at London's ExCel yesterday with current Timelord Matt Smith.

About 8,000 fans a day have flocked to the three-day event, which has featured unpaid appearances by several Doctor Whos including Peter Davison, Colin Baker and Sylvester McCoy as well as Tom Baker, Daleks, Cyber-men and the original K-9 robot dog.

John Heath, 25, went with his sister Ayla in hand-made Dalek and Tardis costumes which they spent six weeks making.

Ayla said: "I love the adventure and the visual effects of Doctor Who. We've loved it since we were young.

"My mum was a big fan and we've watched it as a family for nearly three decades. I'd love to see it last for another 50 years." A more recent convert to the show was Laurina Sassano, 19, who travelled from Nancy in north-eastern France to visit the exhibition.

She admitted to often hiding behind the sofa and said: "The Weeping Angels episode creeped me out. I cried, I was scared, I just couldn't watch it."

Fans snapped up limited edition merchandise, including a numbered series of £180 artworks signed by Tennant, and a gold and silver plated sonic screwdriver. Graham Norton hosted his Radio 2 show from the exhibition despite admitting he rarely watched the series as a youngster, as it wasn't available in southern Ireland.

However, the Tardis touched down in deepest Siberia yesterday when dozens of fans held a pre-screening party in its largest city Novosibirsk.

Student Maria Yajushkina, 22, who leads a Siberian Doctor Who fan group, said: "Our society has existed for three-and-a-half years, usually attracting about 20 people.

"But today we're getting many more and in our internet community we have people from other Siberian cities."

During the Cold War a KGB spy told Moscow: "We will never understand the British unless we comprehend why Doctor Who is so popular."

It seems the Russians have finally got it.

Caption: JUST WHO HAVE THEY COME AS? Dalek girl Roseanna Bandon with brother and sister Ayla and John Heath at the ExCel party while left Weeping Angel fan Amy Stell stand frozen in time

Time Lords gather from across the universe

DOCTOR WHO now truly travels through time and space. Last night The Day of the Doctor, a golden jubilee celebration episode of 50 years of the iconic sci-fi adventurer, was beamed to more than 90 countries.

No matter that the BBC put it into hibernation on a distant planet for 16 years, or that David Dimbleby has never seen it, or that Stephen Fry merely dismisses it as a drama for children.

Doctor Who, like Blue Peter or Coronation Street, is part of the fabric of our television and continues to travel successfully across the generations as a genuine piece of family TV. To think most of what we know about Doctor Who came out of the first episode in November 1963: the police box, the Tardis, the music, the name.

So was it any good? Should "showrunner" Steven Moffatt now be tried for treason and locked in the Tower with the "Black Archive".

Well, he can rest easy at the after-show party on the saved planet of Gallifrey.

This was a warm, witty and wonderful journey through the history of Doctor Who, from the moment the Time Lord was about to blow up his own planet and its people, to its ultimate rescue.

Of course, to do such a complex, daring thing, the Doctor needed a little help: 12 other time travellers, including John Hurt, apparently the "missing" Doctor, and even the "next" Doctor, Peter Capaldi.

It reminded of me of listening to your favourite "Best of..." album which you had just rediscovered in the attic, as suddenly every Doctor who could still pull a lever on the Tardis was pressed into action to "save the day".