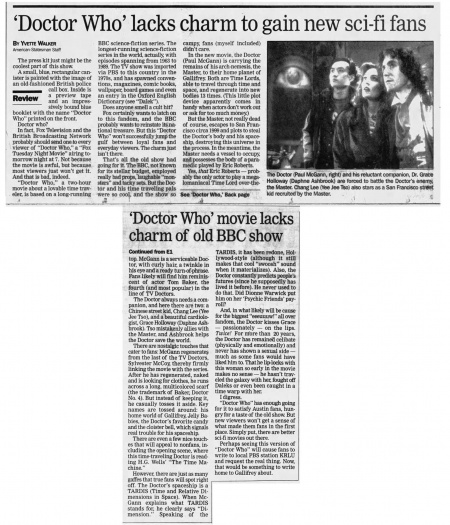 The press kit just might be the coolest part of this show.

A small, blue, rectangular canister is painted with the image of an old-fashioned British police call box. Inside is a preview tape and an impressively bound blue booklet with the name "Doctor Who" printed on the front.

In fact, Fox Television and the British Broadcasting Network probably should send one to every viewer of "Doctor Who," a "Fox Tuesday Night Movie" airing tomorrow night. Not because the movie is awful, but because most viewers just won't get it. And that is bad, indeed.

"Doctor Who," a two-hour movie about a lovable time traveler, is based on a long-running BBC science-fiction series. The longest-running science-fiction series in the world, actually, with episodes spanning from 1963 to 1989. The TV show was imported via PBS to this country in the 1970s, and has spawned conventions, magazines, comic books, wallpaper, board games and even an entry in the Oxford English Dictionary (see "Dalek").

Does anyone smell a cult hit?

Fox certainly wants to latch on to this fandom, and the BBC probably wants to reinstate its national treasure. But this "Doctor Who" won't successfully jump the gulf between loyal fans and everyday viewers. The charm just isn't there.

That's all the old show had going for it. The BBC, not known for its stellar budget, employed really bad props, laughable "monsters" and tacky sets. But the Doctor and his time traveling pals were so cool, and the show so campy, fans (myself included) didn't care.

In the new movie, the Doctor (Paul McGann) is carrying the remains of his arch-nemesis, the Master, to their home planet of Gallifrey. Both are Time Lords, able to travel through time and space, and regenerate into new bodies 13 times. (This little plot device apparently comes in handy when actors don't work out or ask for too much money.)

But the Master, not really dead of course, escapes to San Francisco circa 1999 and plots to steal the Doctor's body and his spaceship, destroying this universe in the process. In the meantime, the Master needs a vessel to occupy, and possesses the body of a paramedic played by Eric Roberts.

Yes, that Eric Roberts -- probably the only actor to play a meglomaniacal Time Lord over-the-top. McGann is a serviceable Doctor, with curly hair, a twinkle in his eye and a ready turn-of-phrase. Fans likely will find him reminiscent of actor Tom Baker, the fourth (and most popular) in the line of TV Doctors.

The Doctor always needs a companion, and here there are two: a Chinese street kid, Chang Lee (Yee Jee Tso), and a beautiful cardiologist, Grace Holloway (Daphne Ashbrook). Tso mistakenly allies with the Master, and Ashbrook helps the Doctor save the world.

There are nostalgic touches that cater to fans: McGann regenerates from the last of the TV Doctors, Sylvester McCoy, thereby firmly linking the movie with the series. After he has regenerated, naked and is looking for clothes, he runs across a long, multicolored scarf (the trademark of Baker, Doctor No. 4). But instead of keeping it, he casually tosses it aside. Key names are tossed around: his home world of Gallifrey, Jelly Babies, the Doctor's favorite candy, and the cloister bell, which signals real trouble for his spaceship.

There are even a few nice touches that will appeal to nonfans, including the opening scene, where this time-traveling Doctor is reading H.G. Wells' "The Time Machine."

However, there are just as many gaffes that true fans will spot right off. The Doctor's spaceship is a TARDIS (Time and Relative Dimensions in Space). When McGann explains what TARDIS stands for, he clearly says "Dimension." Speaking of the TARDIS, it has been redone, Hollywood-style (although it still makes that cool "swoosh" sound when it materializes). Also, the Doctor constantly predicts people's futures (since he supposedly has lived it before). He never used to do that. Did Dionne Warwick put him on her Psychic Friends' payroll?

And, in what likely will be cause for the biggest "eeeuuuw!" all over fandom, the Doctor kisses Grace -- passionately -- on the lips. Twice! Forover 20 years, the Doctor has remained celibate (physically and emotionally) and never has shown a sexual side -- much as some fans would have liked him to. That he lip-locks with this woman so early in the movie makes no sense -- he hasn't traveled the galaxy with her, fought off Daleks or even been caught in a time warp with her.

"Doctor Who" has enough going for it to satisfy Austin fans, hungry for a taste of the old show. But new viewers won't get a sense of what made them fans in the first place. Simply put, there are better sci-fi movies out there.

Perhaps seeing this version of "Doctor Who" will cause fans to write to local PBS station KLRU and request the real thing. Now, that would be something to write home to Gallifrey about.