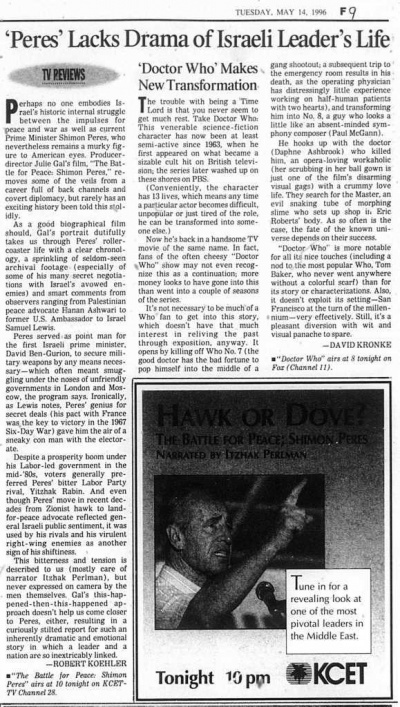 The trouble with being a Time Lord is that you never seem to get much rest. Take Doctor Who: This venerable science-fiction character has now been at least semi-active since 1963, when he first appeared on what became a sizable cult hit on British television; the series later washed up on these shores on PBS.

(Conveniently, the character has 13 lives, which means any time a particular actor becomes difficult, unpopular or just tired of the role, he can be transformed into someone else.)

Now he's back in a handsome TV movie of the same name. In fact, fans of the often cheesy "Doctor Who" show may not even recognize this as a continuation; more money looks to have gone into this than went into a couple of seasons of the series.

It's not necessary to be much of a Who fan to get into this story, which doesn't have that much interest in reliving the past through exposition, anyway. It opens by killing off Who No. 7 (the good doctor has the bad fortune to pop himself into the middle of a gang shootout; a subsequent trip to the emergency room results in his death, as the operating physician has distressingly little experience working on half-human patients with two hearts), and transforming him into No. 8, a guy who looks a little like an absent-minded symphony composer (Paul McGann).

He hooks up with the doctor (Daphne Ashbrook) who killed him, an opera-loving workaholic (her scrubbing in her ball gown is just one of the film's disarming visual gags) with a crummy love life. They search for the Master, an evil snaking tube of morphing slime who sets up shop its Eric Roberts' body. As so often is the case, the fate of the known universe depends on their success.

"Doctor Who'. is more notable for all its nice touches (including a nod to the most popular Who, Tom Baker, who never went anywhere without a colorful scarf) than for its story or characterizations. Also, it doesn't exploit its setting—San Francisco at the turn of the millennium—very effectively. Still, it's a pleasant diversion with wit and visual panache to spare.

Tune in for a revealing look at one of the most pivotal leaders in the Middle East.