Doctor Who reaches a planetary landmark on KCET 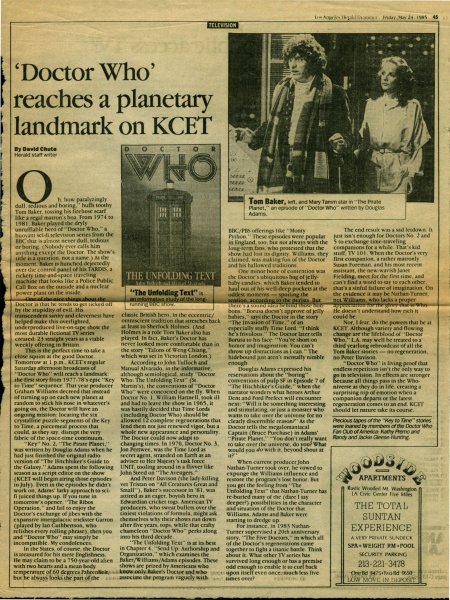 Oh, how paralyzingly dull, tedious and boring," huffs toothy Tom Baker, tossing his firehose scarf like a regal matron's boa. From 1974 to 1981, Baker played the dryly unrufflable hero of "Doctor Who," a buoyant sci-fi television series from the BBC that is almost never dull, tedious or boring. (Nobody ever calls him anything except the Doctor. The show's title is a question, not a name.) At the moment, Baker is hunched dejectedly over the control panel of his TARDIS, a rickety time-and-space traveling machine that looks like a Police Public Call Box on the outside and a nuclear power plant on the inside.

One of the nice things about the Doctor is that he tends to get ticked o by the stupidity of evil. His transcendent sanity and cleverness have helped make this overlighted, underproduced live-on-tape show the most durable fictional TV series created: 23 straight years as a viable weekly offering in Britain.

This is the perfect time to take a close squint at the good Doctor. Tomorrow at 1 p.m., KCET's regular Saturday afternoon broadcasts of "Doctor Who" will reach a landmark: the first story from 1977.78's epic "Key to Time" sequence. That year producer Graham Williams decreed that instead of turning up on each new planet at random to stick his nose in whatever's going on, the Doctor will have an ongoing mission: locating the six crystalline puzzle-segments of the Key to Time, a piecemeal process that could, as they say, disrupt the very fabric of the space-time continuum.

"Key" No. 2, "The Pirate Planet," was written by Douglas Adams when he had just finished the original radio version of "The Hitchhiker's Guide to the Galaxy." Adams spent the following season as a script editor on the show (KCET will begin airing those episodes in July). Even in the episodes he didn't work on, Adams' larky approach to sci-fi juiced things up. If you tune in tomorrow's opener, "The Ribos Operation," and fail to enjoy the Doctor's exchange of jibes with the expansive intergalactic trickster Garron (played by Ian Cuthbertson, who relishes every rolling phrase), then you and "Doctor Who" may simply be incompatible. My condolences.

In the States, of course, the Doctor is treasured for his mere Englishness. He may claim to be a 750-year-old alien with two hearts and a mean body temperature of 60 degrees Fahrenheit, but he always looks the part of the classic British hero, in the eccentric/ omniscient tradition that stretches back at least to Sherlock Holmes. (And Holmes is a role Tom Baker also has played. In fact, Baker's Doctor has never looked more comfortable than in the story "Talons of Weng-Chiang," which was set in Victorian London.)

According to John Tulloch and Manual Alvarado, in the informative, although semiological, study "Doctor Who: The Unfolding Text" (St. Martin's), the conventions of "Doctor Who" were concocted on the fly. When Doctor No. 1 William Hartnell, took ill and had to leave the show in 1965, it was hastily decided that Time Lords (including Doctor Who) should be allowed 12 complete regenerations that lend them not just renewed vigor, but a whole new appearance and personality. The Doctor could now adapt to changing times: In 1970, Doctor No. 3, Jon Pertwee, was the Time Lord as secret agent, stranded on Earth as an adviser to Her Majesty's task force UNIT, tooling around in a flivver like John Steed on "The Avengers."

And Peter Davison (the lady-killing vet Tristan on "All Creatures Great and Small"), Baker's successor in '81, was attired as an eager, boyish hero in Edwardian cricket togs. American TV producers, who sweat bullets over the tiniest violations of formula, might ask themselves why their shows run down after five years, tops. while that crafty chameleon "Doctor Who" perks along into his third decade.

"The Unfolding Text" is at its best in Chapter 4, "Send Up: Authorship and Organization," which examines the Baker/Williams/Adams episodes. These shows are prized by Americans who know only Baker's Doctor and who associate the program vaguely with

BBC/PBS offerings like "Monty Python." These episodes were popular in England, too, but not always with the long-term fans, who protested that the show had lost its dignity. Williams, they claimed, was making fun of the Doctor and his hallowed traditions.

One minor bone of contention was the Doctor's ubiquitous bag of jelly-baby candies, which Baker tended to haul out of his well-deep pockets at the oddest moments — spoiling the tension, according to the purists. But there's a sound idea behind those bonbons: "Borusa doesn't approve of jelly babies," says the Doctor in the story "The Invasion of Time," of an especially stuffy Time Lord. "I think he's frivolous." The Doctor later tells Borusa to his face: "You're short on humor and imagination. You can't throw up distractions as I can." The hidebound just aren't mentally nimble enough.

Douglas Adams expressed his reservations about the "boring" conventions of pulp SF in Episode 7 of "The Hitchhiker's Guide," when the narrator wonders what heroes Arthur Dent and Ford Prefect will encounter next: "Will it be something interesting and stimulating, or just a monster who wants to take over the universe for no clearly discernible reason?" As the Doctor tells the megalomaniacal Captain (Bruce Purchase) in Adams' "Pirate Planet," "You don't really want to take over the universe, do you? What would you do with it, beyond shout at it?"

When current producer John Nathan-Turner took over, he vowed to expunge the Williams influence and restore the program's lost honor. But you get the feeling from "The Unfolding Text" that Nathan-Turner has re-buried many of the (dare I say deeper?) possibilities in the character and situation of the Doctor that Williams, Adams and Baker were starting to dredge up.

For instance, in 1983 Nathan-Turner supervised a 20th anniversary story, "The Five Doctors," in which all of the Doctor's regenerations came together to fight a titanic battle. Think about it: What other TV series has survived long enough or has a premise odd enough to enable it to curl back upon itself even once, much less five times over?

The end result was a sad letdown. It just isn't enough for Doctors No. 2 and 5 to exchange time-traveling companions for a while. That's kid stuff, TV 101. When the Doctor's very first companion, a rather matronly Susan Foreman, and his most recent assistant, the new-wavish Janet Fielding, meet for the first time, and can't find a word to say to each other, that's a sinful failure of imagination. On the evidence it may be Nathan-Turner, not Williams, who lacks a proper appreciation for the glory that is Who. He doesn't understand how rich it could be.

Nor, I fear, do the powers that be at KCET. Although variety and flowing change are the lifeblood of "Doctor Who," L.A. may well be treated to a third yearlong rebroadcast of all the Tom Baker stories — no regeneration, no Peter Davison.

"Doctor Who" is living proof that endless repetition isn't the only way to go in television. Its effects are stronger because all things pass in the Whoniverse as they do in life, creating a surprising nip of emotion when a companion departs or the latest regeneration comes to an end. KCET should let nature take its course.

Precious tapes of the "Key to Time" stones were loaned by members of the Doctor Who Fan Club of America: Kathy Premo and Randy and Jackie Gleese-Hunting.

Caption: Tom Baker, left, and Mary Tamm star in The Pirate Planet," an episode of "Doctor Who" written by Douglas Adams.

Caption: 'The Unfolding Text" is an informative study of the long-running BBC show.