Doctor Who returns to TV in yet another incarnation 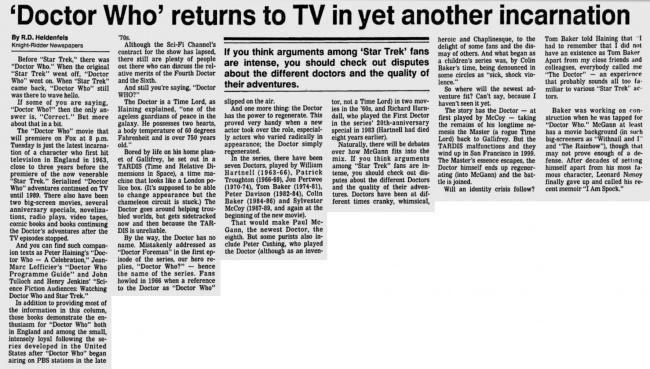 If some of you are saying, "Doctor Who?" then the only answer is, "Correct." But more about that in a bit.

The "Doctor Who" movie that will premiere on Fox at 8 p.m. Tuesday is just the latest incarnation of a character who first hit television in England in 1963, close to three years before the premiere of the now venerable "Star Trek." Serialized "Doctor Who" adventures continued on TV until 1989. There also have been two big-screen movies, several anniversary specials, novelizations, radio plays, video tapes, comic books and books continuing the Doctor's adventures after the TV episodes stopped.

And you can find such companion texts as Peter Haining's "Doctor Who — A Celebration," Jean-Marc Lofficier's "Doctor Who Programme Guide" and John Tulloch and Henry Jenkins' "Science Fiction Audiences: Watching Doctor Who and Star Trek."

In addition to providing most of the information in this column, those books demonstrate the enthusiasm for "Doctor Who" both in England and among the small, intensely loyal following the series developed in the United States after "Doctor Who" began airing on PBS stations in the late '70s.

Although the Sci-Fi Channel's contract for the show has lapsed, there still are plenty of people out there who can discuss the relative merits of the Fourth Doctor and the Sixth.

And still you're saying, "Doctor WHO?"

The Doctor is a Time Lord. as Raining explained, "one of the ageless guardians of peace in the galaxy. He possesses two hearts, a body temperature of 60 degrees Fahrenheit and is over 750 years old."

Bored by life on his home planet of Gallifrey, he set out in a TARDIS (Time and Relative Dimensions in Space), a time machine that looks like a London police box. (It's supposed to be able to change appearance but the chameleon circuit is stuck.) The Doctor goes around helping troubled worlds, but gets sidetracked now and then because the TAR-DIS is unreliable.

And one more thing: the Doctor has the power to regenerate. This proved very handy when a new actor took over the role, especially actors who varied radically in appearance; the Doctor simply regenerated.

That would make Paul McGann, the newest Doctor, the eighth. But some purists also include Peter Cushing, who played the Doctor (although as an Inventor, not a Time Lord) in two movies in the '60s, and Richard Hurndall, who played the First Doctor in the series' 20th-anniversary special in 1983 (Hartnell had died eight years earlier).

Naturally. there will be debates over how McGann fits into the mix. If you think arguments among "Star Trek" fans are intense, you should check out disputes about the different Doctors and the quality of their adventures. Doctors have been at different times cranky, whimsical, heroic and Chaplinesque, to the delight of some fans and the dismay of others. And what began as a children's series was, by Colin Baker's time, being denounced in some circles as "sick, shock violence."

So where will the newest adventure fit? Can't say, because I haven't seen it yet.

The story has the Doctor — at first played by McCoy — taking the remains of his longtime nemesis the Master (a rogue Time Lord) back to Gallifrey. But the TARDIS malfunctions and they wind up in San Francisco in 1999. The Master's essence escapes, the Doctor himself ends up regenerating (into McGann) and the battle is joined.

Tom Baker told Raining that '1 had to remember that I did not have an existence as Tom Baker Apart from my close friends and colleagues. everybody called me "The Doctor" — an experience that probably sounds all too familiar to various "Star Trek' actors.

Baker was working on construction when he was tapped for "Doctor Who." McGann at least has a movie background (in such big-screeners as "Withnail and and "The Rainbow"), though that may not prove enough of a defense. After decades of setting himself apart from his most famous character, Leonard Nimoy finally gave up and called his recent memoir "I Am Spock."

If you think arguments among 'Star Trek' fans are intense, you should check out disputes about the different doctors and the quality of their adventures.