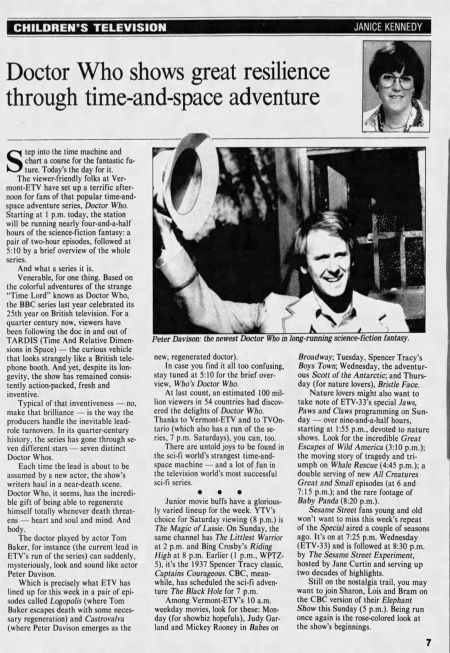 Step into the time machine and chart a course for the fantastic future. Today's the day for it.

The viewer-friendly folks at Vermont-ETV have set up a terrific afternoon for fans of that popular time-and-space adventure series, Doctor Who. Starting at 1 p.m. today, the station will be running nearly four-and-a-half hours of the science-fiction fantasy: a pair of two-hour episodes, followed at 5:10 by a brief overview of the whole series.

And what a series it is.

Venerable, for one thing. Based on the colorful adventures of the strange "Time Lord" known as Doctor Who, the BBC series last year celebrated its 25th year on British television. For a quarter century now, viewers have been following the doc in and out of TARDIS (Time And Relative Dimensions in Space) — the curious vehicle that looks strangely like a British telephone booth. And yet, despite its longevity, the show has remained consistently action-packed, fresh and inventive.

Typical of that inventiveness — no, make that brilliance — is the way the producers handle the inevitable lead-role turnovers. In its quarter-century history, the series has gone through seven different stars — seven distinct Doctor Whos.

Each time the lead is about to be assumed by a new actor, the show's writers haul in a near-death scene. Doctor Who, it seems, has the incredible gift of being able to regenerate himself totally whenever death threatens — heart and soul and mind. And body.

The doctor played by actor Tom Baker, for instance (the current lead in ETV's run of the series) can suddenly, mysteriously, look and sound like actor Peter Davison.

Which is precisely what ETV has lined up for this week in a pair of episodes called Logopolis (where Tom Baker escapes death with some necessary regeneration) and Castrovalva (where Peter Davison emerges as the new, regenerated doctor).

In case you find it all too confusing, stay tuned at 5:10 for the brief overview, Who's Doctor Who.

At last count, an estimated 100 million viewers in 54 countries had discovered the delights of Doctor Who. Thanks to Vermont-ETV and to TVOntario (which also has a run of the series, 7 p.m. Saturdays), you can, too.

There are untold joys to be found in the sci-fi world's strangest time-and-space machine — and a lot of fun in the television world's most successful sci-fi series.