Doctor Who to make a timely arrival at Proms 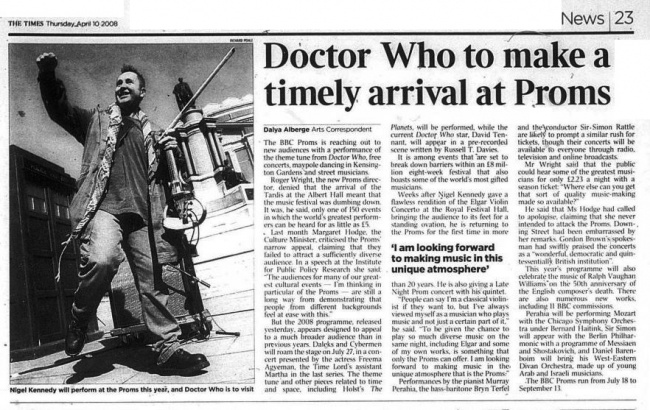 The BBC Proms is reaching out to new audiences with a performance of the theme tune from Dotter Who, free concerts, maypole dancing in Kensington Gardens and street musicians.

Roger Wright, the new Proms director, denied that the arrival of the Tardis at the Albert Hall meant that the music festival was dumbing down. It was, he said, only one of 150 events in which the world's greatest performers can be heard for as little as £5.

Last month Margaret Dodge, the Cullum Minister, criticised the Proms' narrow appeal, claiming that they failed to attract a sufficiently diverse audience. In a speech at the Institute for Public Policy Research she said. "The audiences for many of our greatest cultural events — I'm thinking in particular of the Proms — are still a long way from demonstrating that people from different backgrounds feel at ease with this."

But the 2008 programme, released yesterday. appears designed to appeal to a much broader audience than in previous years. Daleks and Cybermen will roam the stage on July 27, in a concert presented by the actress Freema Agyeman. the Time Lord's assistant Martha in the last series The theme tune and other pieces related to time and space, including Holst's The Planets. will be performed, while the current Doctor Who star, David Tennant, will appear in a pre-recorded scene written by Russell T. Davies. It is among events that are not to break down harriers within an £8 million eight-week festival that also boasts some of the world's most gifted musicians.

Weeks after Nigel Kennedy gave a flawless rendition of the Elgar Violin Concerto at the Royal Festival Hall, bringing the audience to its feet for a standing ovation, he is returning to the Proms for the first time in more than 20 years. He is also giving a Late Night Prom concert with his quintet. People can say I'm a classical violinist if they want to. but I've always viewed myself as a musician who plays music and not just a certain part of it." he said "To be given the chance to play so -much diverse music on the same night. including Elgar and some of my own works. is something that only the Proms can offer. lam looking forward M making music in the% unique atmosphere that is the Proms."

Performances by the pianist Murray Perahia, the bass-baritone Bryn Terfel and the conductor Sir Simon Rattle are likely to prompt a similar rush for tickets, though their concerts will be available to everyone through radio, television and online broadcasts.

Mr Wright said that the public could hear some of the greatest musicians for only £2.23 a night with a season ticket "Where else can you get that sort of quality music-making made no available?"

He said that Ms Hodge had called to apologise, claiming that she never intended to attack the Proms. Downing Street had been embarrassed by her remarks. Gordon Brown's spokesman had swiftly praised the concerts a "wonderful, democratic and quintessentially British institution."

This year's programme will also celebrate the music of Ralph Vaughan Williams on the 50th anniversary of the English composer's death. There are also numerous new works, including 11 BBC commissions.

Perahia will be performing Mozart with the Chicago Symphony Orchestra under Bernard Haitink, Sir Simon will appear with the Berlin Philharmonic with a programme of Messiaen and Shostakovich, and Daniel Barenboim will bring his West-Eastern Divan Orchestra, made up of young Arab and Israeli musicians.

The BBC Proms run from July 18 to September 13.

Caption: Nigel Kennedy will perform at the Proms this year, and Doctor Who is to visit