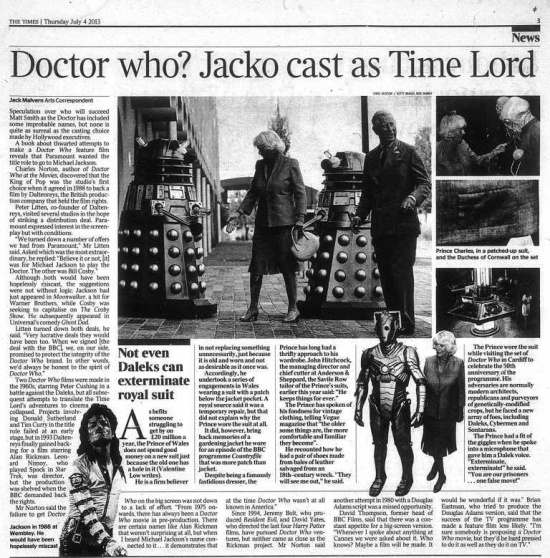 Speculation over who will succeed Matt Smith as the Doctor has included some improbable names, but none is quite as surreal as the casting choice made by Hollywood executives.

A book about thwarted attempts to make a Doctor Who feature film reveals that Paramount wanted the title role to go to Michael Jackson.

Charles Norton, author of Doctor Who at the Movies, discovered that the King of Pop was the studio's first choice when it agreed in 1988 to back a film by Daltenreys, the British production company that held the film rights. Peter Litten, co-founder of Daltenreys, visited several studios in the hope of striking a distribution deal. Paramount expressed interest in the screenplay but with conditions.

"We turned down a number of offers we had from Paramount," Mr Litten said. Asked which was the most extraordinary, he replied: "Believe it or not, [it] was for Michael Jackson to play the Doctor. The other was Bill Cosby."

Although both would have been hopelessly miscast, the suggestions were not without logic. Jackson had just appeared in Moonwalker, a hit for Warner Brothers, while Cosby was seeking to capitalise on The Cosby Show. He subsequently appeared in Universal's comedy Ghost Dad.

Litten turned down both deals, he said. "Very lucrative deals they would have been too. When we signed [the deal with the BBC], we, on our side, promised to protect the integrity of the Doctor Who brand. In other words, we'd always be honest to the spirit of Doctor Who."

Two Doctor Who films were made in the 1960s, starring Peter Cushing in a battle against the Daleks, but all subsequent attempts to translate the Time Lord's adventures to cinema collapsed. Projects involving Donald Sutherland and Tim Curry in the title role failed at an early stage, but in 1993 Daltenreys finally gained backing for a film starring Alan Rickman. Leonard Nimoy, who played Spock in Star Trek, was director, but the production was shelved when the BBC demanded back the rights.

Mr Norton said the failure to get Doctor Who on the big screen was not down to a lack of effort. "From 1975 onwards, there has always been a Doctor Who movie in pre-production. There are certain names like Alan Rickman that weren't surprising at all, but when I heard Michael Jackson's name connected to it ... it demonstrates that at the time Doctor Who wasn't at all known in America."

Since 1994, Jeremy Bolt, who produced Resident Evil, and David Yates, who directed the last four Harry Potter films, have pursued Doctor Who ventures, but neither came as close as the Rickman project. Mr Norton said another attempt in 1980 with a Douglas Adams script was a missed opportunity.

David Thompson, former head of BBC Films, said that there was a constant appetite for a big-screen version. "Whenever I spoke about anything at Cannes we were asked about it. Who knows? Maybe a film will be made. It would be wonderful if it was." Brian Eastman, who tried to produce the Douglas Adams version, said that the success of the TV programme has made a feature film less likely. "I'm sure somebody is proposing a Doctor Who movie, but they'd be hard pressed to do it as well as they do it on TV."

GRAPHIC: Jackson in 1988 at Wembley. He would have been hopelessly miscast