Dogged by the Doc 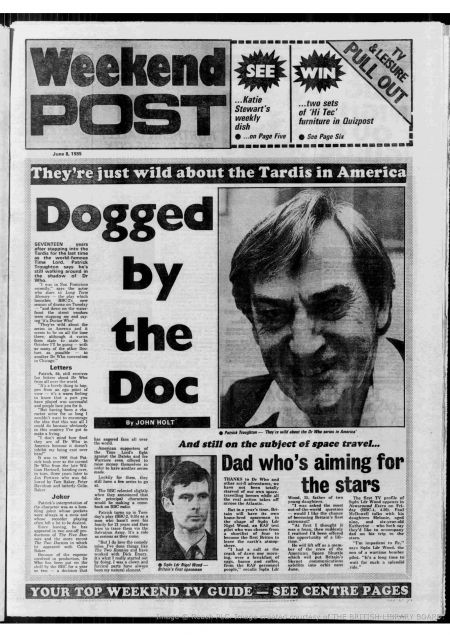 SEVENTEEN years after stepping into the Tardis for the last time as the world-famous Time Lord. Patrick Troughton says he's still walking around in the shadow of Dr Who.

"I was in San Francisco recently," says the actor who stars in Long Term Memory — the play which launches BBC-2's sew season of drama on Tuesday — "and down on the water front the street vendors were stopping me and saying it's Doctor Who!'

"They're wild about the series in America and it seems to be on all the time there, although it varies from state to state. In October I'll be going — with as many of the other Doctors as possible - to another Dr Who convention in Chicago."

Patrick. 64, still receives fan letters about Dr Who is from all over the world.

"It's a lovely thing to happen from an ego point of view — it's a warm feeling to know that a part you have played was successful and people love you for it. "But having been a ratter actor for so long I wouldn't want to encourage the idea that this was all I could do because obviously in this country I've got to make a living.

"I don't mind how fond they are of Dr Who in America because it doesn't inhibit my being cast over here!"

It was in 1966 that Patrick took over as the second Dr Who from the late William Hartnell, handing over, in turn, three years later to Jon Pertwee who was followed by Tom Baker, Peter Davidson and latterly Colin Baker.

Patrick's interpretation of the character was as a bumbling joker whose pockets were always in a mess and whose recorder playing often left a lot to be desired. Since leaving, he has appeared in two one-off productions of The Five Doctors and the more recent The Two Doctors in which he appeared with Colin Baker.

Because of the expense involved in production, Dr Who Iris been put on the shelf by the BBC for a year or too - a decision that has angered fans all over the world.

American supported of the Time Lord's fight against the Daleks and Ice Warriors even offered to raise money themselves in order to have another series made.

Luckily for them, they still have a few series to go at.

The BBC relented slightly when they announced that the principal characters would be making a comeback on BBC radio.

Patrick turns up in Tuesday's play (BBC-2, 9.35) as a man who hasn't seen his family for 21 years and then tries to trace them via the Salvation Army. It's a role as serious as they come.

"But I do love the comedy roles. I've done things like The Two Fannies arid have worked with Dick Emery. It's what I really started out by doing. I was a clown and farcical parts have always been my natural element."