Don't fret about a female Time Lord. The inequality is in the real world 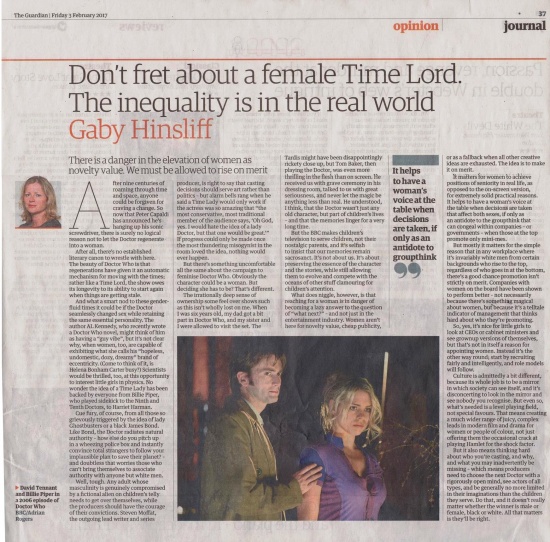 There is a danger in the elevation of women as novelty value. We must be allowed to rise on merit

After nine centuries of roaming through time and space, anyone could be forgiven for craving a change. So now that Peter Capaldi has announced he's hanging up his sonic screwdriver, there is surely no logical reason not to let the Doctor regenerate into a woman.

After all, there's no established literary canon to wrestle with here. The beauty of Doctor Who is that regenerations have given it an automatic mechanism for moving with the times; rather like a Time Lord, the show owes its longevity to its ability to start again when things are getting stale.

And what a smart nod to these gender-fluid times it could be if the Doctor seamlessly changed sex while retaining the same essential personality. The author AL Kennedy, who recently wrote a Doctor Who novel, might think of him as having a "guy vibe", but it's not clear why, when women, too, are capable of exhibiting what she calls his "hopeless, undomestic, dozy, dreamy" brand of eccentricity. (Come to think of it, is Helena Bonham Carter busy?) Scientists would be thrilled, too, at this opportunity to interest little girls in physics. No wonder the idea of a Time Lady has been backed by everyone from Billie Piper, who played sidekick to the Ninth and Tenth Doctors, to Harriet Harman.

Cue fury, of course, from all those so grievously triggered by the idea of lady Ghostbusters or a black James Bond. Like Bond, the Doctor radiates natural authority - how else do you pitch up in a wheezing police box and instantly convince total strangers to follow your implausible plan to save their planet? and doubtless that worries those who can't bring themselves to associate authority with anyone but white men.

Well, tough. Any adult whose masculinity is genuinely compromised by a fictional alien on children's telly needs to get over themselves, while the producers should have the courage of their convictions. Steven Moffat, the outgoing lead writer and series producer, is right to say that casting decisions should serve art rather than politics - but alarm bells rang when he said a Time Lady would only work if the actress was so amazing that "the most conservative, most traditional member of the audience says, 'Oh God, yes. I would hate the idea of a lady Doctor, but that one would be great:" If progress could only be made once the most thundering misogynist in the room loved the idea, nothing would ever happen.

But there's something uncomfortable all the same about the campaign to feminise Doctor Who. Obviously the character could be a woman. But deciding she has to be? That's different.

The irrationally deep sense of ownership some feel over shows such as this isn't wholly lost on me. When I was six years old, my dad got a bit part in Doctor Who, and my sister and I were allowed to visit the set. The Tardis might have been disappointingly rickety close up, but Tom Baker, then playing the Doctor, was even more thrilling in the flesh than on screen. Ile received us with grave ceremony in his dressing room, talked to us with great seriousness, and never let the magic be anything less than real. He understood, I think, that the Doctor wasn't just any old character, but part of children's lives - and that the memories linger for a very long time.

But the BBC makes children's television to serve children, not their nostalgic parents, and it's selfish to insist that our memories remain sacrosanct. It's not about us. It's about preserving the essence of the character and the stories, while still allowing them to evolve and compete with the oceans of other stuff clamouring for children's attention.

What does niggle, however, is that reaching for a woman is in danger of becoming a lazy answer to the question of "what next?" - and not just in the entertainment industry. Women aren't here for novelty value, cheap publicity, or as a fallback when all other creative ideas are exhausted. The idea is to make it on merit.

It matters for women to achieve positions of seniority in real life, as opposed to the on-screen version, for extremely solid practical reasons. It helps to have a woman's voice at the table when decisions are taken that affect both sexes, if only as an antidote to the groupthink that can congeal within companies - or governments - when those at the top promote only mini-mes.

But mostly it matters for the simple reason that in any workplace where it's invariably white men from certain backgrounds who rise to the top, regardless of who goes in at the bottom, there's a good chance promotion isn't strictly on merit. Companies with women on the board have been shown to perform better - not necessarily because there's something magical about women, but because it's a telltale indicator of management that thinks hard about who they're promoting.

So, yes, it's nice for little girls to look at CEOs or cabinet ministers and see grownup versions of themselves, but that's not in itself a reason for appointing women. Instead it's the other way round; start by recruiting fairly and intelligently, and role models will follow.

Culture is admittedly a bit different, because its whole job is to be a mirror in which society can see itself, and it's disconcerting to look in the mirror and see nobody you recognise. But even so, what's needed is a level playing field, not special favours. That means creating a much wider range of juicy, complex leads in modern film and drama for women or people of colour, not just offering them the occasional crack at playing Hamlet for the shock factor.

But it also means thinking hard about who you're casting, and why, and what you may inadvertently be missing - which means producers need to choose the next Doctor with a rigorously open mind, see actors of all types, and be generally no more limited in their imaginations than the children they serve. Do that, and it doesn't really matter whether the winner is male or female, black or white. All that matters is they'll be right.

Caption: David Tennant and Billie Piper in a 2006 episode of Doctor Who