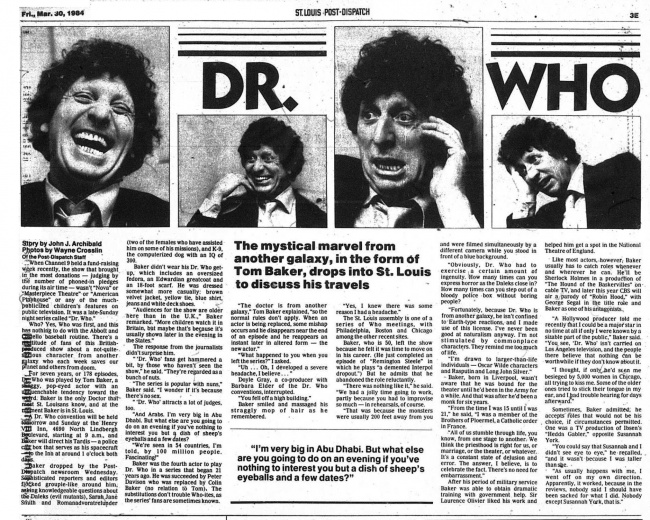 The mystical marvel from another galaxy, in the form of Tom Baker, drops into St. Louis to discuss his travels

When Channel 9 held a fundraising week recently. the show that brought In the mast donations — judging by the number of phoned-in pledges during its air time — wasn't "Nova" or "Masterpiece Theatre" or "American Playhouse" or any of the much-publicized children's features on public television. It was a late-Sunday night series called "Dr. Who."

Who? Yes. Who was first, and this has nothing to do with the Abbott and Costello baseball routine. There's a multitude of fans of this British-produced show about a not-quite-serious character from another galaxy who each week saves our planet and others from doom.

For seven years, or 178 episodes, Dr. Who was played by Tom Baker, a shaggy, pop-eyed actor with an unquenchable tendency toward the weird. Baker is the only Doctor that most St. Louisan know, and at the moment Baker is in St. Louis.

A Dr. Who convention will be held tomorrow and Sunday at the Henry VII Inn, 4690 North Lindbergh Boulevard, starting at 9 am., and Baker will direct his Tardls — a police cat box that serves as his spacecraft -- to the Inn at around 1 o'clock both days.

Baker dropped by the Post-Dispatch newsroom Wednesday. Sophisticated reporters and editors flocked groupie-like around him, asking knowledgeable questions about the Daleks (evil mutants), Sarah Jane Smith and Romanadvoratrelunder (two of the females who have assisted him on some of has missions), and K-9, the computerized dog with an IQ of 300.

"Audiences for the show are over here than in the U.K.." Baker remarked. 'More children watch it in Britain, but maybe that's because it's usually shown later in the evening in the States."

The response from the journalists didn't surprise him.

"'Dr. Who' fans get hammered a bit, by those who haven't seen the show," he said. "They're regarded as a bunch of nuts.

"The series is popular with nuns," Baker said. 'I wonder if it's because there's no sex.

"And Arabs. I'm very big in Abu Dhabi. But what else are you going to do on an evening if you've nothing to interest you but a dish of sheep's eyeballs and a few dates?

Baker was the fourth actor to play Dr. Who in a series that began 21 years ago. He was succeeded by Peter Davison who was replaced by Colin Baker (no relation to Tom). The substitutions don't trouble Who-ites, as the series' fans are sometimes known.

"The doctor is from another galaxy," Tom Baker explained, "so the normal rules don't apply. When an actor is being replaced, some mishap occurs and he disappears near the end of an episode and he reappears an instant later In altered form — the new actor."

"What happened to you when you left the series?" I asked.

Doyle Gray, a co-producer with Barbara Elder of the Dr. Who conventions interrupted.

"You fell off a high building."

Baker smiled and massaged his straggly mop of hair as he remembered.

"Yes, I knew there was some reason I had a headache."

The St. Louis assembly is one of a series of Who meetings, with Philadelphia, Boston and Chicago among the other recent sites.

Baker, who is 50, left the show because he felt it was time to move on in his career. (He just completed an episode of "Remington Steele" in which he plays "a demented Interpol dropout") But he admits that he abandoned the role reluctantly.

"There was nothing like it," he said. "We had a jolly time going to work, partly because you had to improvise so much — in rehearsals, of course.

"That was because the monsters were usually 200 feet away from you and were filmed simultaneously by a different camera while you stood In front of a blue background.

"Fortunately, because Dr. Who is from another galaxy, he isn't confined to Earth-type reactions, and I made use of this license. I've never been good at naturalism anyway. I'm not stimulated by commonplace characters. They remind me to much of life.

"I am drawn to larger-than-life individuals—Oscar Wilde characters and Rasputin and Long John Silver.'

Baker, born in Liverpool, wasn't aware that he was bound for the theater until he'd been in the Army for a while. And that was after he'd been a monk for six years.

"From the time I was 15 until I was 21," he said. "I was a member of the Brothers of Ploermel, a Catholic order in France.

"All of us stumble through life, you know, from one stage to another. We think the priesthood is right for us, or marriage, or the theater, or whatever. It's a constant stale of delusion and error. The answer. 1 believe. Is to celebrate the fact. There's no need for embarrassment."

After his period of military service Baker was able to obtain dramatic training with government help. Sir Laurence Olivier liked his work and helped him get a spot in the National Theatre of England.

Like most actors, however, Baker usually has to catch roles whenever and wherever he can. He'll be Sherlock Holmes in a production of "The Hound of the Baskervilles" on cable TY, and later this year CBS will air a parody of "Robin Hood" with George Segal in the title role and Baker as one of antagonists.

"A Hollywood producer told me recently that I could be a major star in no time at all if only I were known by a sizable part of the public," Baker sold. "You see, 'Dr. Who' isn't carried on Los Angeles television, and the people there believe that nothing can be worthwhile if they don't know about.

"I thought, if only he'd seen me besieged by 5,000 women in Chicago, all trying to kiss me. Some of the older ones tried to stick their tongue in my ear, and I had trouble hearing for days afterward."

Sometimes, Baker admitted, he accepts roles that would not be his choice, if circumstances permitted. One was a TV production of Ibsen's "Hedda Gabler," opposite Susannah York.

"You could say that Susannah and I didn't see eye to eye,' he recalled. "and it wasn't because I was taller than she.

"As usually happens with me, I went off on my own direction. Apparently, it worked because in the reviews, nobody said I should have been sacked for what I did. Nobody except Susannah York, that is.'