Dr. Who's fans meet in this galaxy 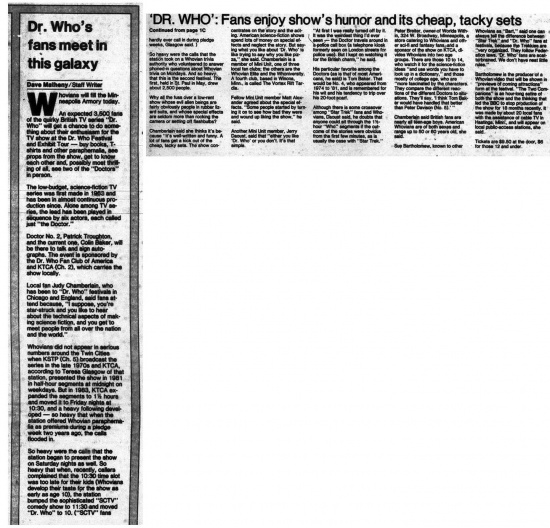 An expected 3,500 fans of the quirky British TV series "Dr. Who" will get a chance to do something about their enthusiasm for the TV show at the Dr. Who Festival and Exhibit Tour - buy books, T-shirts and other paraphernalia, see props from the show, get to know each other and, possibly most thrilling of all, see two of the "Doctors" in person.

The low-budget, science-fiction TV series was first made in 1963 and has been in almost continuous production since. Alone among TV series, the lead has been played in sequence by six actors, each called just "the Doctor."

Doctor No. 2, Patrick Troughton, and the current one, Colin Baker, will be there to talk and sign autographs. The event is sponsored by the Dr. Who Fan Club of America and KTCA (Ch. 2), which carries the show locally.

Local fan Judy Chamberlain, who has been to "Dr. Who" festivals in Chicago and England, said fans attend because, "I suppose, you're star-struck and you like to hear about the technical aspects of making science fiction, and you get to meet people from all over the nation and the world."

Whovians did not appear in serious numbers around the Twin Cities when KSTP (Ch. 5) broadcast the series in the late 1970s and KTCA, according to Teresa Glasgow of that station, presented the show in 1981 in half-hour segments at midnight on weekdays. But in 1983, KTCA expanded the segments to 1 1/2 hours and moved it to Friday nights at 10:30, and a heavy following developed - so heavy that when the station offered Whovian paraphernalia as premiums during a pledge week two years ago, the calls flooded in.

So heavy were the calls that the station began to present the show on Saturday nights as well. So heavy that when, recently, callers complained that the 10:30 time slot was too late for their kids (Whovians develop their taste for the show as early as age 10), the station bumped the sophisticated "SCTV" comedy show to 11:30 and moved "Dr. Who" to 10. ("SCTV" fans hardly ever call in during pledge weeks, Glasgow said.)

So heavy were the calls that the station took on a Whovian trivia authority who volunteered to answer phoned-in questions about Whovian trivia on Mondays. And so heavy that this is the second festival. The first, held in St. Paul in May, drew about 2,500 people.

Why all the fuss over a low-rent show whose evil alien beings are fairly obviously people in rubber lizard suits, and whose special effects are seldom more than rocking the camera or setting off flashbulbs?

Chamberlain said she thinks it's because "it's well-written and funny. A lot of fans get a kick out of the cheap, tacky sets. The show concentrates on the story and the acting. American science-fiction shows spend lots of money on special effects and neglect the story. But saying what you like about 'Dr. Who' is like trying to say why you like pizza," she said. Chamberlain is a member of Mini Unit, one of three local fan clubs; the others are the Whovian Elite and the Whoniversity. A fourth club, based in Winona, Minn., is called The Vortex Rift Tardis.

Fellow Mini Unit member Matt Alexander agreed about the special effects. "Some people started by turning it on to see how bad they were and wound up liking the show," he said.

Another Mini Unit member, Jerry Daoust, said that "either you like 'Dr. Who' or you don't. It's that simple.

"At first I was really turned off by it. It was the weirdest thing I'd ever seen - the Doctor travels around in a police call box (a telephone kiosk formerly seen on London streets for police use). But I kept on watching it for the British charm," he said.

His particular favorite among the Doctors (as is that of most Americans, he said) is Tom Baker. That would be No. 4, who appeared from 1974 to '81, and is remembered for his wit and his tendency to trip over his 20-foot scarf.

Although there is some crossover among "Star Trek" fans and Whovians, Daoust said, he doubts that anyone could sit through the 1 1/2-hour "Who" segments if the outcome of the stories were obvious from the first few minutes, as is usually the case with "Star Trek."

Peter Breiter, owner of Worlds Within, 324 W. Broadway, Minneapolis, a store catering to Whovians and other sci-fi and fantasy fans, and a sponsor of the show on KTCA, divides Whovians into two age groups. There are those 10 to 14, who watch it for the science-fiction ideas "and use words you have to look up in a dictionary," and those mostly of college age, who are "more fascinated by the characters. They compare the different reactions of the different Doctors to situations. They'll say, 'I think Tom Baker would have handled that better than Peter Davison (No. 5).'"

Chamberlain said British fans are nearly all teen-age boys. American Whovians are of both sexes and range up to 50 or 60 years old, she said.

Sue Bartholomew, known to other Whovians as "Bart," said one can always tell the difference between "Star Trek" and "Dr. Who" fans at festivals, because the Trekkies are "very organized. They follow Federation laws. 'Dr. Who' fans are scatterbrained. We don't have neat little rules."

Bartholomew is the producer of a Whovian video that will be shown in "previews of coming attractions" form at the festival. "The Two Companions" is an hour-long satire of both the show and the thinking that led the BBC to stop production of the show for 18 months recently. It was made by about 20 local fans with the assistance of cable TV in Hastings, Minn., and will appear on local public-access stations, she said.