Dr. Who's journeys will end on Alabama Public Television 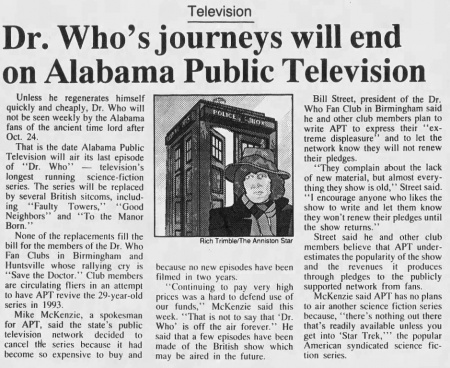 Unless he regenerates himself quickly and cheaply, Dr. Who will not be seen weekly by the Alabama fans of the ancient time lord after Oct. 24.

That is the date Alabama Public Television will air its last episode of "Dr. Who" — television's longest running science-fiction series. The series will be replaced by several British sitcoms, including "Faulty Towers," "Good Neighbors" and "To the Manor Born."

None of the replacements fill the bill for the members of the Dr. Who Fan Clubs in Birmingham and Huntsville whose rallying cry is "Save the Doctor." Club members are circulating fliers in an attempt to have APT revive the 29-year-old series in 1993.

Mike McKenzie, a spokesman for APT, said the state's public television network decided to cancel flit series because it had become so expensive to buy and because no new episodes have been filmed in two years.

"Continuing to pay very high prices was a hard to defend use of our funds," McKenzie said this week. "That is not to say that 'Dr. Who' is off the air forever." He said that a few episodes have been made of the British show which may be aired in the future.

Bill Street, president of the Dr. Who Fan Club in Birmingham said he and other club members plan to write APT to express their "extreme displeasure" and to let the network know they will not renew their pledges.

"They complain about the lack of new material, but almost everything they show is old," Street said. "I encourage anyone who likes the show to write and let them know they won't renew their pledges until the show returns."

Street said he and other club members believe that APT underestimates the popularity of the show and the revenues it produces through pledges to the publicly supported network from fans.