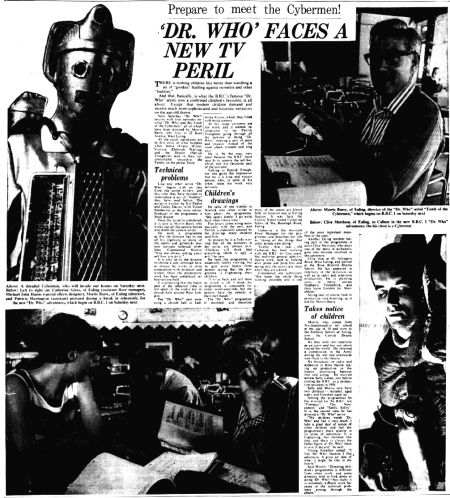 Prepare to meet the Cybermen!

THERE is nothing children like better than watching a set of "goodies" battling against monsters and other "baddies."

And that, basically, is what the B.B.C.'s famous "Dr. Who" series, now a confirmed children's favourite, is all about. Except that modern children demand and receive much more sophisticated and futuristic variations on the age-old theme.

Next Saturday "Dr. Who" returns with four episodes entitled "Dr. Who and the Tomb of the Cybermen," all of which have been directed by Morris Barry, who lives at 22 Kent Avenue, West Ealing.

All the usual ingredients are in this story of what happens when Jamie (Frazer Hines), Victoria (Deborah Watling) and the Doctor (Patrick Troughton) land in their uncontrollable spaceship, the Tardis, on the planet Telos.

Like any other series "Dr. Who" begins with an idea from the script writers. and this time they have decided to reintroduce a set of "baddies" they have used before. The script is written by Kit Pedler and Gerry Davies, with Victor Pemberton as the story editor. Producer of the programme is Peter Bryant.

Once the script is completed, it is sent to Morris Barry who works out all the camera moves and drafts the camera script.

On such a programme as this the director has to use all his ingenuity as many of the stunts and gimmicks present intricate technical problems. Commented Morris: "You are always asking yourself how you do it."

It is also up to the director to choose a cast, although here. as always, he works in close conjunction with producer and writers. Once the preparatory work has been completed, rehearsals are held.

If it is surprising that the major part of the rehearsal time is not spent in the studio but in church halls around West London.

The "Dr. Who" cast were using a church hall in Ladbroke Grove, which they filled with mock scenery.

At this stage costumes are not worn, and it seemed incongruous to see Patrick Troughton going through all the motions of being Dr. Who, wearing a pair of jeans and sweater instead of the usual check trousers and long coat.

He is, by the way, very upset because the B.B.C. have seen fit to remove the tall hat, which was his favourite part of the costume.

Talking to Patrick Troughton one gains the impression that he is a kind and sincere person, who, in spite of his jokes, takes is work very seriously.

He talks of one woman in Norfolk who often writes to him about the programme. "She seems lonely. I do write back from time to time."

Fan letters come along automatically with the part, and Patrick is especially amused by the drawings many children send him.

At present he is a little worried that all the monsters in the series are always evil: "Children will think that everything which is ugly is evil," he says.

"I write back and tell them to switch it off. I think the programme is unsuitable for under seven-year-olds, but the parents have the remedy in their own hands."

The "Dr. Who" program is recorded, and therefore many of the scenes are filmed both on location and that the Ealing studios. It was here the county times found Catherine Sykes of 56a, Ranelagh Road, Ealing.

Catherine is the Assistant Floor Manager for the programme and describes her job as "doing all the things that other people want doing."

Twenty-five-year-old Catherine has been working with the B.B.C. for four years. She performs general administrative work, such as looking after props and prop lists and seeing that the actors are there when they are wanted.

Commented one technician: "She keeps the whole thing running smoothly and is one of the most important members of the team."

Another Ealing resident taking part in the programme is actor Clive Merrison, who plays one of the party of archaeologists to become involved in this adventure.

Clive lives at 45, Arlington Road, West Ealing, and trained at the Rose Bruford Drama school. He has appeared in repertory in the provinces as well as in radio and television productions. He is planning soon to Mary actress Stephanie Tremethick, and then leave London for Manchester.

Acting can, of course, lead to production and directing, as it did for more asperity.

Morris, who comes from Northamptonshire left school at the age of 18 and went to the Embassy School of Acting, now the Central Drama School.

He then went into repertory as an actor and has just about toured and the world. He obtained a commission and the Army during the war and afterwards went back to theatre.

He broadcast on radio and appeared in films before taking a production in the theatre, the alternating between that and acting. He married Sally Lahee, just before joining the BBC as a production assistant in 1956.

Among the programs he has directed for the B.B.C. are "Compact," "The Newcomers and "Softly, Softly." It is the second time his directed a Dr. Who series.

"My children watch Dr. Who and like it very much. I take a great deal of notice of other children and feel the program's main quality is its sense of adventure. It is frightening, but children like that, and there is always the father figure of 'Dr. Who' there to win in the end," he said.

Said Morris: "Directing children's programmes is different from other work, and some directors tend to look down and doing Dr. Who dashed but really it is extremely difficult work because of the technical problems arising through the effects."

Above: A dreaded Cyberman, who will invade our homes on Saturday next. Below: Left to right are Catherine Sykes, of Ealing (assistant floor manager), Michael John Harris (special effects designer), Morris Barry, of Ealing (director), and Patricia Harrington (assistant) pictured during a break in rehearsals, for the new "Dr. Who" adventures, which begin on B.B.C. 1 on Saturday next

Above: Morris Barry, of Ealing, director of the Dr. who serial tomb of the Simon, which begins on BBC one Saturday next

Below: Clive Merrison, of Ealing, as calendar in the new BBC one of Dr. Who adventures. On his chest is a Cybermat