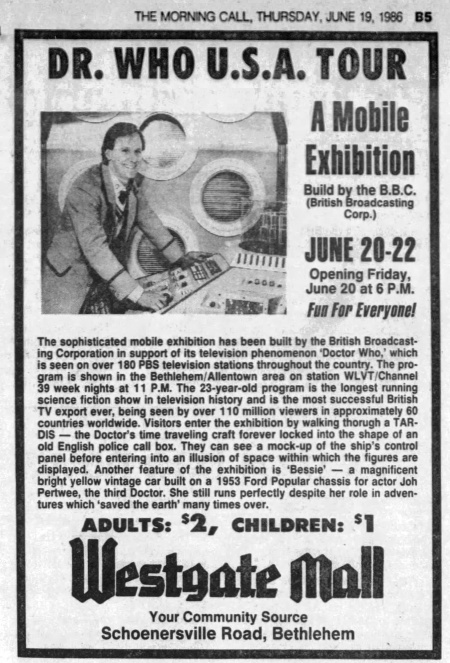 The sophisticated mobile exhibition has been built by the British Broadcasting Corporation in support of its television phenomenon 'Doctor Who.' which is seen on over 180 PBS television stations throughout the country. The program is shown in the Bethlehem Allentown area on station WLVT Channel 39 week nights at 11 P.M. The 23-year-old program is the longest running science fiction show in television history and is the most successful British TV export ever. being seen by over 110 million viewers in approximately 60 countries worldwide. Visitors enter the exhibition by walking thorugh a TARDIS — the Doctor's time traveling craft forever locked into the shape of an old English police call box. They can see a mock-up of the ship's control panel before entering into an illusion of space within which the figures are displayed. Another feature of the exhibition is 'Bessie' — a magnificent bright yellow vintage car built on a 1953 Ford Popular chassis for actor Joh Pertwee, the third Doctor. She still runs perfectly despite her role in adventures which 'saved the earth' many times over.