Dr. Who and Daleks at Bingley Hall 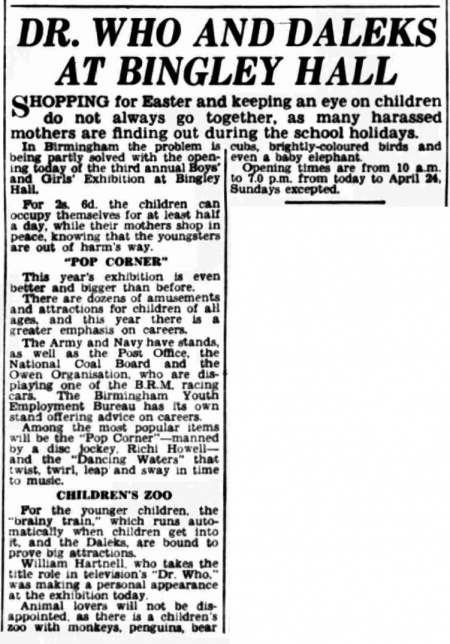 SHOPPING for Easter and keeping an eye on children do not always go together, as many harassed mothers are finding out during the school holidays.

In Birmingham the problem is being partly solved with the opening today of the third annual Boys' and Girls' Exhibition at Bingley Hall.

For 2s. 6d. the children can occupy themselves for at least half a day, while their mothers shop in peace, knowing that the youngsters are out of harm's way.

This year's exhibition Is even better and bigger than before. There are dozens of amusements and attractions tor children of all ages, and this year there is a greater emphasis on careers.

The Army and Navy have stands. as well as the Poet Office, the National Coal Board and the Owen Organisation, who are displaying one of the B.R.M. racing cars. The Birmingham Youth Employment Bureau has Its own stand offering advice on careers.

Among the most popular items will be the "Pop Corner"—manned by a disc Jockey, Richi Howell -- and the "Dancing Waters" that twist, twirl, leap and sway in time to music.

For the younger children, the "brainy train," which runs automatically when children get into it, and the Daleks, are bound to prove big attractions. William Hartnell, who takes the title role in television's "Dr. Who," was making a personal appearance at the exhibition today.

Animal lovers will not be disappointed, as there is a children's zoo with monkeys, penguins, bear cubs, brightly-coloured birds and even a baby elephant.