Dr. Who and the Daleks 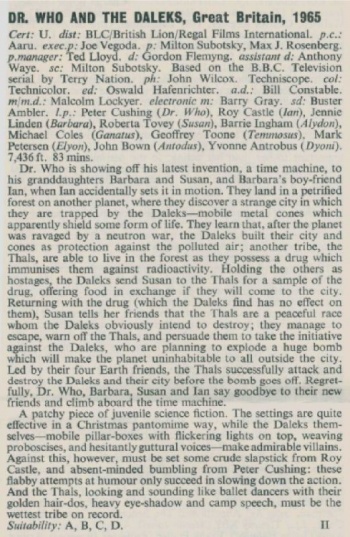 Dr. Who is showing off his latest invention, a time machine, to his granddaughters Barbara and Susan, and Barbara's boy-friend Ian, when Ian accidentally sets it in motion. They land in a petrified forest on another planet, where they discover a strange city in which they are trapped by the Daleks—mobile metal cones which apparently shield some form of life. They learn that, after the planet was ravaged by a neutron war, the Daleks built their city and cones as protection against the polluted air; another tribe, the Thals, are able to live in the forest as they possess a drug which immunises them against radioactivity. Holding the others as hostages, the Daleks send Susan to the Thals for a sample of the drug, offering food in exchange if they will come to the city. Returning with the drug (which the Daleks find has no effect on them), Susan tells her friends that the Thals are a peaceful race whom the Daleks obviously intend to destroy; they manage to escape, warn off the Thals, and persuade them to take the initiative against the Daleks, who are planning to explode a huge bomb which will make the planet uninhabitable to all outside the city. Led by their four Earth friends, the Thals successfully attack and destroy the Daleks and their city before the bomb goes off. Regretfully, Dr. Who, Barbara, Susan and Ian say goodbye to their new friends and climb aboard the time machine.

A patchy piece of juvenile science fiction. The settings are quite effective in a Christmas pantomime way, while the Daleks themselves—mobile pillar-boxes with flickering lights on top, weaving proboscises, and hesitantly guttural voices—make admirable villains. Against this, however, must be set some crude slapstick from Roy Castle, and absent-minded bumbling from Peter Cushing: these flabby attempts at humour only succeed in slowing down the action. And the Thals, looking and sounding like ballet dancers with their golden hair-dos, heavy eye-shadow and camp speech, must be the wettest tribe on record.