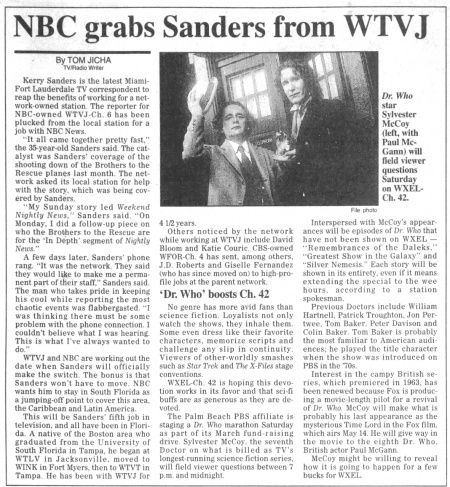 No genre has more avid fans than science fiction. Loyalists not only watch the shows, they inhale them. Some even dress like their favorite characters, memorize scripts and challenge any slip in continuity. Viewers of other-worldly smashes such as Star Trek and The X-Files stage conventions.

WXEL-Ch. 42 is hoping this devotion works in its favor and that sci-fi buffs are as generous as they are devoted.

The Palm Beach PBS affiliate is staging a Dr. Who marathon Saturday as part of its March fund-raising drive. Sylvester McCoy, the seventh Doctor on what is billed as TV's longest-running science fiction series, will field viewer questions between 7 p.m. and midnight.

Interspersed with McCoy's appearances will be episodes of Dr. Who that have not been shown on WXEL - "Remembrances of the Daleks," "Greatest Show in the Galaxy" and "Silver Nemesis. "Each story will be shown in its entirety, even if it means extending the special to the wee hours, according to a station spokesman.

Previous Doctors include William Hartnell, Patrick Troughton, Jon Pertwee, Tom Baker, Peter Davison and Colin Baker. Baker is probably the most familiar to American audiences; he played the title character when the show was introduced on PBS in the '70s.

Interest in the campy British series, which premiered in 1963, has been renewed because Fox is producing a movie-length pilot for a revival of Dr. Who. McCoy will make what is probably his last appearance as the mysterious Time Lord in the Fox film, which airs May 14. He will give way in the movie to the eighth Dr. Who, British actor Paul McGann.

Caption: Dr. Who, Sylvester McCoy, will field viewer questions between 7 p.m. and midnight on Ch. 42.