Dr. Who captures attention of sci-fi fans in 54 countries 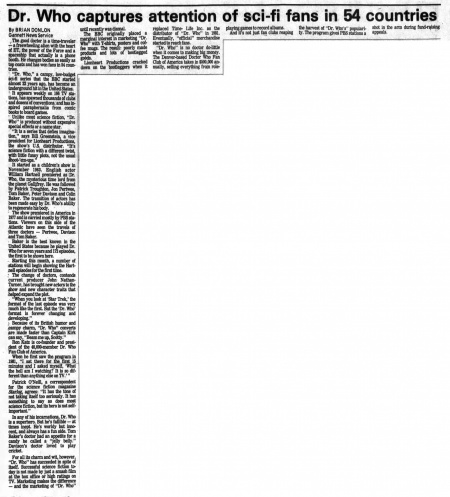 The good doctor is a time-traveler — a freewheel* alien with the heart of ET, the power of the Force and a spaceship that actually is a phone booth. He changes bodies as easily as top coats and has won fans in 54 countries.

"Dr. Who," a campy, low-budget sci-fi series that the BBC started almost 22 years ago, has become an underground hit in the United States.

It appears weekly on 166 TV stations, has spawned thousands of clubs and dozens of conventions, and has inspired paraphernalia from comic books to board games.

Unlike most science fiction, "Dr. Who is produced without expensive special effects or a name star.

"It is a series that defies imagination," says Bill Greenstein, a vice president for Lionheart Productions, the show's U.S. distributor. "It's science fiction with a different twist, with little funny plots, not the usual shoot-'em-ups."

It started as a children's show in November 1963. English actor William Hartnell premiered as Dr. Who, the mysterious time lord from the planet Gallifrey. He was followed by Patrick Troughton, Jon Pertwee, Tom Baker, Peter Davison and Colin Baker. The transition of actors has been made easy by Dr. Who's ability to regenerate his body.

The show premiered in America in 1977 and is carried mostly by PBS stations. Viewers on this side of the Atlantic have seen the travels of three doctors — Pertwee, Davison and Tom Baker.

Baker is the best known in the United States because he played Dr. Who for seven years and 172 episodes, the first to be shown here.

Starting this month, a number of stations will begin showing the Hartnell episodes for the first time.

The change of doctors, contends current producer John Nathan-Turner, has brought new actors to the show and new character traits that helped expand the plot.

"When you look at 'Star Trek,' the format of the last episode was very much like the first. But the Dr. Who' format is forever changing and developing."

Because of its British humor and campy charm, "Dr. Who converts are made faster than Captain Kirk can say, "Beam me up, Scotty."

Ron Katz is co-founder and president of the 40,000-member Dr. Who Fan Club of America.

When he first saw the program in 1981, "I sat there for the first 15 minutes and I asked myself, 'What the hell am I watching? It is so different than anything else on TV.' "

Patrick O'Neill, a correspondent for the science fiction magazine Starlog, agrees: "It has the tone of not taking itself too seriously. It has something to say as does most science fiction, but its hero is not self-important."

In any of his incarnations, Dr. Who is a superhero. But he's fallible — at times inept. He's worldy but innocent, and always has a fun side. Tom Baker's doctor had an appetite for a candy he called a "jelly belly." Davison's doctor loved to play cricket.

For all its charm and wit, however, "Dr. Who has succeeded in spite of itself. Successful science fiction today is not made by just a smash film at the box office or high ratings on TV. Marketing makes the difference — and the marketing of "Dr. Who" until recently was dismal.

The BBC originally placed a marginal interest in marketing "Dr. Who with T-shirts, posters and coffee mugs. The result: poorly made products and lots of bootlegged goods.

Lionheart Productions cracked down on the bootleggers when it replaced Time- Life Inc. as the distributor of "Dr. Who in 1981. Eventually, "official" merchandise started to reach fans.

"Dr. Who is no doctor do-little when it comes to making big money. The Denver-based Doctor Who Fan Club of America takes in $500,000 annually, selling everything from roleplaying games to record albums.

And its not just fan clubs reaping the harvest of "Dr. Who's" popularity. The program gives PBS stations a shot in the arm during fund-flitting appeals.