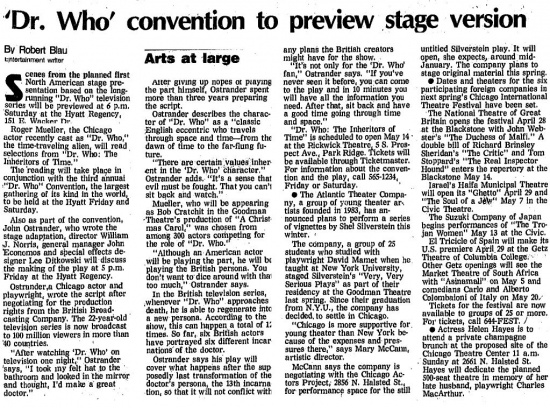 Scenes from the planned first North American stage presentation based on the long-running "Dr. Who" television series will be previewed at 6 p.m. Saturday at the Hyatt Regency, 151 E. Wacker Dr.

Roger Mueller, the Chicago actor recently cast as "Dr. Who," the time-traveling alien, will read selections from "Dr. Who: The Inheritors of Time."

The reading will take place in conjunction with the third annual "Dr. Who" Convention, the largest gathering of its kind in the world, to be held at the Hyatt Friday and Saturday.

Also as part of the convention, John Ostrander, who wrote the stage adaptation, director William J. Norris, general manager John Economos and special effects designer Lee Ditkowski will discuss the making of the play at 5 p.m. Friday at the Hyatt Regency. Ostronder, a Chicago actor and playwright, wrote the script after negotiating for the production rights from the British Broadcasting Company. The 22-year-old television series is now broadcast to 100 million viewers in more than 40 countries.

"After watching 'Dr. Who' on television one night," Ostrander says, "I took my felt hat to the bathroom and looked in the mirror and thought, I'd make a great doctor."

After giving up hopes on playing the part himself, Ostrander spent more than three years preparing the script. Ostrander describes the character of "Dr. Who" as a "classic English eccentric who travels through space and time-from the dawn of time to the far-flung future.

"There are certain value inherent in the 'Dr. Who" character." Ostrander adds. "it's a sense the evil must be fought. That you can sit back and watch."

Mueller, who will be appearing as Bob Cratchit in the Goodman -Theatre's production of "A Christmas Carol," was chosen from among 300 actors competing for the role 'of "Dr. Who."

In the British television series, whenever "Dr. Who" approaches death, he is able to regenerate into a new persona. According to the show, this can happen a total of 12 times. So far, six British actors have portrayed six different incarnations of the doctor.

Ostrander says his play will cover what happens alter the supposedly last transformation of the doctor's persona, the 13th incarnation, so that it will not conﬂict with any plans the British creators might have for the show.

"It's not only for the 'Dr. Who' fan," Ostrander says. "If you've never seen it before, you can come to the play and in 10 minutes you will have all the information you need. After that, sit back and have a good time going through time and space."

"Dr. Who: The Inheritors of Time" is scheduled to open May 14 at the Pickwick Theatre, 5 S. Prospect Ave. Park Ridge. Tickets will be available through Ticketmaster. For information about the convention and the play, call 565-1234, Friday or Saturday.