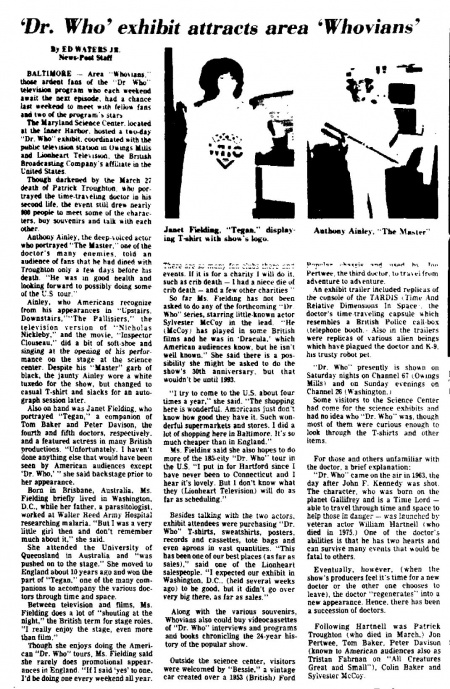 BALTIMORE -- Area "Whovians," those ardent fan of the "Dr Who" television program who each weekend await the next episode, had a chance last weekend to meet with fellow fans laid two of the program's stars.

The Maryland Science Center, located at the Inner Harbor, hosted a two-day "Dr. Who" exhibit, coordinated with the public television station in Owings Mills and Lionheart Television, the British Broadcasting Company's affiliate in the United States.

Though darkened by the March 27 death of Patrick Troughton, who portrayed the time-traveling doctor in his second life, the event still drew nearly 900 people to meet some of the characters, buy souvenirs and talk with each other.

Anthony Ainley, the deep-voiced actor who portrayed The Master," one of the doctor's many enemies, told an audience of fans that he had dined with Troughton only a few days before his death. "He was in good health and looking forward to possibly doing some of the U.S tour.'

Ainley, who Americans recognize from his appearances in "Upstairs, Downstairs," "The Pallisiers," the television version of "Nicholas Nickleby," and the movie, "Inspector Clouseau," did a bit of soft-shoe and singing at the opening of his performance on the stage at the science center- Despite his "Master" garb of black, the jaunty Ainley wore a white tuxedo for the show, but changed to casual T-shirt and slacks for an autograph session later.

Also on hand was Janet Fielding. who portrayed "Tegan," a companion of Tom Baker and Peter Davison, the fourth and fifth doctors, respectively. and a featured actress in many British productions. "Unfortunately. I haven't done anything else that would have been seen by American audiences except 'Dr- Who,' " she said backstage prior to her appearance.

Born in Brisbane, Australia, Ms. Fielding briefly lived in Washington. D.C., while her father, a parasitologist. worked at Walter Reed Army Hospital researching malaria. "But I was a very little girl then and don't remember much about it," she said.

She attended the University of Queensland in Australia and "was pushed on to the stage." She moved to England about 10 years ago and won the part of "Tegan," one of the many companions to accompany the various doctors through time and space.

Between television and films, Ms. Fielding does a lot of "shouting at the night," the British term for stage roles. "I really enjoy the stage, even more than film."

Though she enjoys doing the American "Dr. Who" tours, Ms. Fielding said she rarely does promotional appearances in England. "If I said 'yes' to one, I'd be doing one every weekend all year.

There are so many fan clubs there and events. If it is for a charity I will do it, such as crib death — I had a niece die of crib death -- and a few other charities."

So far Ms. Fielding has not been asked to do any of the forthcoming "Dr Who" series, starring little-known actor Sylvester McCoy in the lead- "He (McCoy) has played in some British films and he was in 'Dracula,' which American audiences know. but he isn't well known." She said there is a possibility she might be asked to do the show's 30th anniversary. but that wouldn't be until 1993.

"I try to come to the U.S. about four times a year," she said. "The shopping here is wonderful. Americans just don't know how good they have it. Such wonderful supermarkets and stores. 1 did a lot of shopping here in Baltimore. It's so much cheaper than in England."

Ms. Fielding said she also hopes to do more of the 185-city "Dr. Who" tour in the U.S. "I put in for Hartford since I have never been to Connecticut and I hear it's lovely. But I don't know what they (Lionheart Television) will do as far as scheduling."

Besides talking with the two actors, exhibit attendees were purchasing "Dr. Who" T-shirts, sweatshirts, posters, records and cassettes, tote bags and even aprons in vast quantities. "This has been one of our best places (as far as sales)," said one of the Lionheart salespeople. "I expected our exhibit in Washington, D.C (held several weeks ago) to be good, but it didn't go over very big there, as far as sales."

Along with the various souvenirs, Whovians also could buy videocassettes of "Dr. Who" interviews and programs and books chronicling the 24-year history of the popular show.

Outside the science center, visitors were welcomed by "Bessie," a vintage car created over a 1953 (British) Ford Popular chassis and used by Jon Pertwee, the third doctor, to travel from adventure to adventure.

An exhibit trailer included replicas of the console of the TARDIS (Time And Relative Dimensions In Space). the doctor's time-traveling capsule which resembles a British Police call-box (telephone booth) Also in the trailers were replicas of various alien beings which have plagued the doctor and K-9. his trusty robot pet.

"Dr. Who" presently is shown on Saturday nights on Channel 67 (Owings Mills) and on Sunday evenings on Channel 26 (Washington)

Some visitors to the Science Center had come for the science exhibits and had no idea who "Dr. Who" was, though most of them were curious enough to look through the T-shirts and other items.

For those and others unfamiliar with the doctor. a brief explanation:

"Dr. Who" came on the air in 1963, the day after John F. Kennedy was shot. The character, who was born on the planet Gallifrey and is a Time Lord — able to travel through time and space to help those in danger — was launched by veteran actor William Hartnell who died in 1975.) One of the doctor's abilities is that he has two hearts and can survive many events that would be fatal to others.

Eventually, however, (when the show's producers feel it's time for a new doctor or the other one chooses to leave), the doctor "regenerates" into a new appearance. Hence, there has been a succession of doctors.