Dr. Who followers produce their own MPT pledge videos 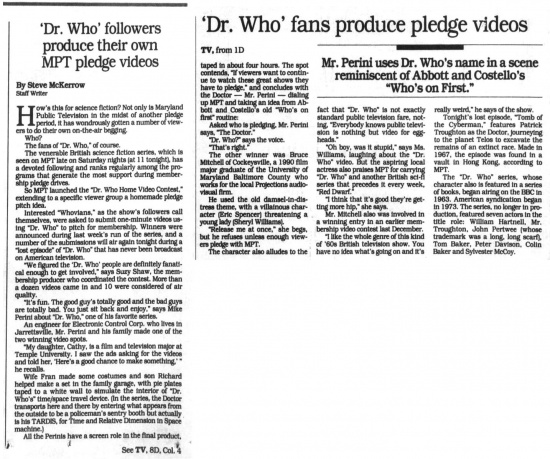 How's this for science fiction? Not only is Maryland Public Television in the midst of another pledge period, it has wondrously gotten a number of viewers to do their own on-the-air begging.

The venerable British science fiction series, which is seen on MPT late on Saturday nights (at 11 tonight), has a devoted following and ranks regularly among the programs that generate the most support during membership pledge drives.

So MPT launched the "Dr. Who Home Video Contest," extending to a specific viewer group a homemade pledge pitch idea.

Interested "Whovians," as the show's followers call themselves, were asked to submit one-minute videos using "Dr. Who" to pitch for membership. Winners were announced during last week's run of the series, and a number of the submissions will air again tonight during a "lost episode" of "Dr. Who" that has never been broadcast on American television.

"We figured the 'Dr. Who' people are definitely fanatical enough to get involved," says Suzy Shaw, the membership producer who coordinated the contest. More than a dozen videos came in and 10 were considered of air quality.

"It's fun. The good guy's totally good and the bad guys are totally bad. You just sit back and enjoy," says Mike Perini about "Dr. Who," one of his favorite series.

An engineer for Electronic Control Corp. who lives in Jarrettsville, Mr. Perini and his family made one of the two winning video spots.

"My daughter, Cathy, is a film and television major at Temple University. I saw the ads asking for the videos and told her, 'Here's a good chance to make something,'" he recalls.

Wife Fran made some costumes and son Richard helped make a set in the family garage, with pie plates taped to a white wall to simulate the interior of "Dr. Who's" time/space travel device. (In the series, the Doctor transports here and there by entering what appears from the outside to be a policeman's sentry booth but actually is his TARDIS, for Time and Relative Dimension in Space machine.)

All the Perinis have a screen role in the final product, taped in about four hours. The spot contends, "If viewers want to continue to watch these great shows they have to pledge," and concludes with the Doctor -- Mr. Perini -- dialing up MPT and taking an idea from Abbott and Costello's old "Who's on first" routine:

Asked who is pledging, Mr. Perini says, "The Doctor."

The other winner was Bruce Mitchell of Cockeysville, a 1990 film major graduate of the University of Maryland Baltimore County who works for the local Projections audiovisual firm.

"Release me at once," she begs, but he refuses unless enough viewers pledge with MPT.

"Oh boy, was it stupid," says Ms. Williams, laughing about the "Dr. Who" video. But the aspiring local actress also praises MPT for carrying "Dr. Who" and another British sci-fi series that precedes it every week, "Red Dwarf."

"I think that it's good they're getting more hip," she says.

"I like the whole genre of this kind of '60s British television show. You have no idea what's going on and it's really weird," he says of the show.

Tonight's lost episode, "Tomb of the Cyberman," features Patrick Troughton as the Doctor, journeying to the planet Telos to excavate the remains of an extinct race. Made in 1967, the episode was found in a vault in Hong Kong, according to MPT.

The "Dr. Who" series, whose character also is featured in a series of books, began airing on the BBC in 1963. American syndication began in 1973. The series, no longer in production, featured seven actors in the title role: William Hartnell, Mr. Troughton, John Pertwee (whose trademark was a long, long scarf), Tom Baker, Peter Davison, Colin Baker and Sylvester McCoy.