Dr. Who is way out, but still so British 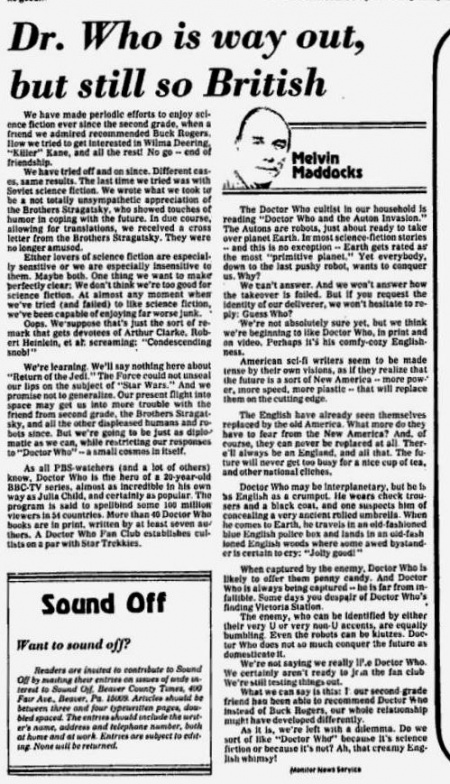 We have made periodic efforts to enjoy science fiction ever since the second grade, when a friend we admired recommended Buck Rogers. How we tried to get interested in Wilma Deering, "Killer" Kane, and all the rest! No go end of friendship.

We have tried off and on since. Different cases, same results. The last time we tried was with Soviet science fiction. We wrote what we took to be a not totally unsympathetic appreciation of the Brothers Stragatsky, who showed touches of humor in coping with the future. In due course, allowing for translations, we received a cross letter from the Brothers Stragatsky. They were no longer amused.

We're learning. We'll say nothing here about "Return of the Jedi." The Force could not unseal our lips on the subject of "Star Wars." And we promise not to generalize. Our present flight into spare may get us into more trouble with the friend from second grade, the Brothers Stragatsky, and all the other displeased humans and robots since. But we're going to be just as diplomatic as we can, while restricting our responses to "Doctor Who" a small cosmos in itself.

As all PBS watchers (and a lot of others) know, Doctor Who is the hero of a 20-year-old BBC-TV series, almost as incredible in his own way as Julia Child, and certainly as popular. The program is said to spellbind some l00 million viewers in 54 countries. More than 40 Doctor Who books are in print, written by at least seven authors. A Doctor Who Fun Club establishes cultists on a par with Star Trekkies.

The Doctor Who cultist in our household is reading "Doctor Who and the Auton Invasion." The Autons are robots, just about ready to take over planet Earth. In most science-fiction stories -- and this is no exception -- Earth gets rated as the most "primitive planet." Yet everybody, down to the last pushy robot, wants to conquer us. Why?

We can't answer. And we won't answer how the takeover is foiled. But If you request the identity of our deliverer, we won't hesitate to reply: Guess Who?

We're not absolutely sure yet, but we think we're beginning to like Doctor Who, In print and on video. Perhaps it's his comfy-cozy Englishness.

American sci-fi writers seem to be made tense by their own visions, as if they realize that the future is a sort of New America? -- more power, more speed, more plastic that will replace them on the cutting edge.

The English have already seen themselves replaced by the old America. What more do they have to fear from the New America? And, of course, they can never be replaced at all. There'll always be an England, and all that. The future will never get too busy for a nice cup of tea, and other national cliches.

Doctor Who may be interplanetary, but he is as English as a crumpet. He wears check trousers and a black coat, and ono suspects him of concealing a very ancient rolled umbrella. When he comes to Earth, he travels in an old-fashioned blue English police box and lands In an old-fashioned English woods where some awed bystander is certain to cry: "Jolly good!"

When captured by the enemy, Doctor Who is likely to offer them penny candy. And Doctor Who is always being captured he is far from infallible. Some days you despair of Doctor Who's finding Victoria Station.

The enemy, who can he identified by either their very U or very non-U accents, arc equally bumbling. Even the robots can be klutzes. Doctor Who dies not so much conquer the future as domesticate it.

We're not saying we really like Doctor Who. We certainly aren't ready to join the fan club. We're still testing things out.

What we can say is this! I our second grade friend has been able to recommend Doctor Who instead of Buck Rogers, our whole relationship might have developed differently.

As it is, we're left with a dilemma. Do we sort of like "Doctor Who' because it's science fiction) or because it's not? Ah, that creamy English whimsy?