Dr. Who meets the Drahvins was when he lands on a strange planet at the start of a new adventure 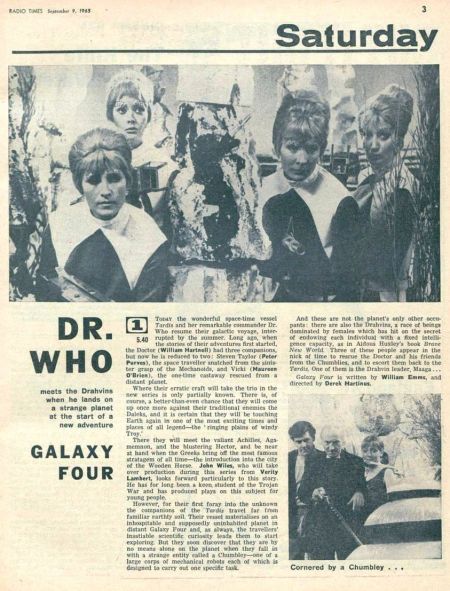 Today the wonderful space time vessel Tardis and her remarkable commander Dr. Who resume their galactic voyage, interrupted by the summer. Long ago, when the stories of their adventures are started, the Doctor (William Hartnell) had three companions, but now is reduced to two: Steven Taylor (Peter Purves), a space traveller snatched from the sinister grasp of the Mechanoids, and Vicki (Maureen O'Brien), the one-time castaway rescued from a distant planet.

Where their erratic craft will take the trio in the new series is only partially known. There is, of course, a better-than-even chance that they will come up once more against their traditional enemies the Daleks, and it is certain that they will be touching Earth again in one of the most exciting times and places of all legend - the 'ringing plains of windy Troy.'

There they will meet the valiant Achilles, Agamemnon, and the blustering Hector, and be near at hand when the Greeks bring off the most famous stratagem of all time - the introduction into the city of the Wooden Horse. John Wiles, who will take over production during this series from Verity Lambert, looks forward particularly to this story. He has long a keen student of the Trojan war and has produced plays on the subject for young people.

However, for their first foray into the unknown the companions of the Tardis to travel far from familiar earthly soil. Their vessel materialises on an inhospitable and supposedly uninhabited planet in distant Galaxy Four and, as always, the travellers insatiable scientific curiosity leads them to start exploring. But they soon discover that they are by no means alone on the planet when they fall in with a strange entity called a Chumbley - one of a large core of mechanical robots each of which is designed to carry out one specific task.

And these are not the planet's only other occupants: there are also Drahvins, a race of beings dominated by females which has hit on the secret of endowing each individual with a fixed intelligence capacity, as in Aldous Huxley's book Brave New York. Three of these people appear in the nick of time to rescue the Doctor and his friends from the Chumbleys, and to escort them back to the Tardis. One of them is the Drahvin leader Maaga ...

Galaxy Four is written by William Emms, and directed by Derek Martinez.