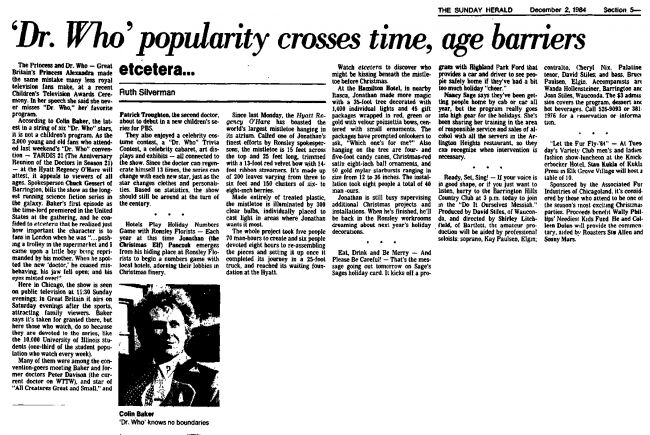 The Princess and Dr. Who — Great Britain's Princess Alexandra made the same mistake many less royal television fans make, at a recent Children's Television Awards Ceremony. In her speech she said she never misses "Dr. Who," her favorite program.

According to Colin Baker, the latest in a string of six "Dr. Who" stars, it is not a children's program. As the 2,000 young and old fans who attended last weekend's "Dr. Who" convention — TARDIS 21 (The Anniversary Reunion of the Doctors in Season 21) — at the Hyatt Regency O'Hare will attest, it appeals to viewers of all ages. Spokesperson Chuck Gessert of Barrington, bills the show as the longest running science fiction series in the galaxy. Baker's first episode as the time-lord premiered in the United States at the gathering, and he confided to et cetera that he realized just how important the character is to fasts in London when he was "...pushing a trolley in the supermarket and came upon a little boy being reprimanded by his mother. When he spotted the new 'doctor,' he ceased misbehaving; his jaw fell open; and his eyes misted over!"

Here in Chicago, the show is seen on public television at 11:30 Sunday evenings; in Great Britain it airs on Saturday evenings after the sports, attracting family viewers, Baker says it's taken for granted there, but here those who watch, do so because they are devoted to the series, tike the 10,000 University of Illinois students (one-third of the student population who watch every week).

Many of them were among the convention-goers meeting Baker and former doctors Peter Davison (the current doctor on WTTW), and star of "All Creatures Great and Small," and Patrick Troughton, the second doctor, about to debut in a new children's series for PBS.

They also enjoyed a celebrity costume contest, a "Dr. Who" Trivia Contest, a celebrity cabaret, art displays and exhibits — all connected to the show. Since the doctor can regenerate himself 13 times, the series can change with each new star, just as the star changes clothes and personalities. Based on statistics, the show should still be around at the turn of the century.