Dr. Who returns to air 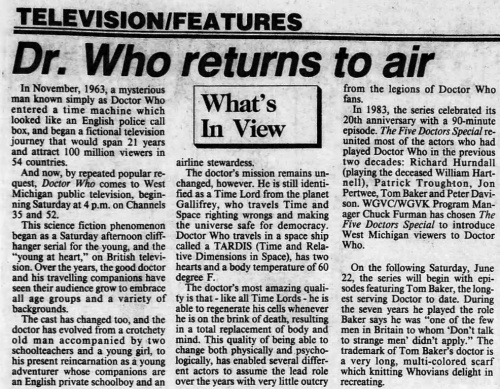 In November, 1963, a mysterious man known simply as Doctor Who entered a time machine which looked like an English police call box, and began a fictional television journey that would span 21 years and attract 100 million viewers in 54 countries.

And now, by repeated popular request, Doctor Who comes to West Michigan public television, beginning Saturday at 4 p.m. on Channels 35 and 52.

This science fiction phenomenon began as a Saturday afternoon cliffhanger serial for the young, and the "young at heart," on British television. Over the years, the good doctor and his travelling companions have seen their audience grow to embrace all age groups and a variety of backgrounds.

The cast has changed too, and the doctor has evolved from a crotchety old man accompanied by two schoolteachers and a young girl, to his present reincarnation as a young adventurer whose companions are an English private schoolboy and an airline stewardess.

The doctor's mission remains unchanged. however. He is still identified as a Time Lord from the planet Gallifrey, who travels Time and Space righting wrongs and making the universe safe for democracy. Doctor Who travels in a space ship called a TARDIS (Time and Relative Dimensions in Space), has two hearts and a body temperature of 60 degree F.

The doctor's most amazing quality is that - like all Time Lords - he is able to regenerate his cells whenever he is on the brink of death, resulting in a total replacement of body and mind. This quality of being able to change both physically and psychologically, has enabled several different actors to assume the lead role over the years with very little outcry from the legions of Doctor Who fans.

In 1983, the series celebrated its 20th anniversary with a 90-minute episode. The Five Doctors Special reunited most of the actors who had played Doctor Who in the previous two decades: Richard Hurndall (playing the deceased William Hartnell), Patrick Troughton, Jon Pertwee, Tom Baker and Peter Davison. WGVC/WGVK Program Manager Chuck Furman has chosen The Five Doctors Special to introduce West Michigan viewers to Doctor Who.

On the following Saturday, June 22, the series will begin with episodes featuring Tom Baker, the longest serving Doctor to date. During the seven years he played the role Baker says he was "one of the few men in Britain to whom 'Don't talk to strange men' didn't apply." The trademark of Tom Baker's doctor is a very long, multi-colored scarf which knitting Whovians delight in recreating.