Dr. Who takes on world's Scrooges 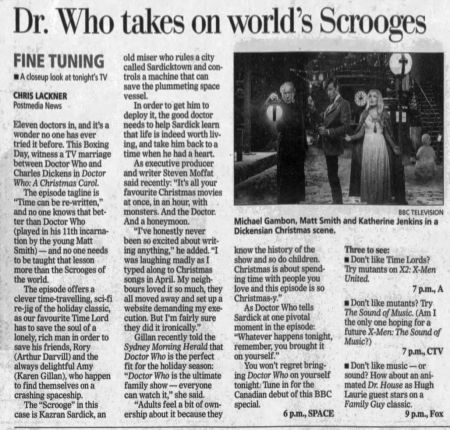 Eleven doctors in, and it's a wonder no one has ever tried it before. This Boxing Day, witness a TV marriage between Doctor Who and Charles Dickens in Doctor Who: A Christmas Carol.

The episode tagline is "Time can be re-written," and no one knows that better than Doctor Who (played in his 11th incarnation by the young Matt Smith) — and no one needs to he taught that lesson more than the Scrooges of the world.

The episode offers a clever time-travelling, sci-fi re-jig of the holiday classic, as our favourite Time Lord has to save the soul of a lonely, rich man in order to save his friends, Rory (Arthur Darvill) and the always delightful Amy (Karen Gillan), who happen to find themselves on a crashing spaceship.

The "Scrooge" in this case is Kazran Sardick, an old miser who rules a city called Sardicktown and controls a machine that can save the plummeting space vessel.

In order to get him to deploy it, the good doctor needs to help Sardick learn that life is indeed worth living, and take him back to a time when he had a heart.

As executive producer and writer Steven Moffat said recently: "It's all your favourite Christmas movies at once, in an hour, with monsters. And the Doctor. And a honeymoon.

"I've honestly never been so excited about writing anything," he added. "I was laughing madly as I typed along to Christmas songs in April. My neighbours loved it so much, they all moved away and set up a website demanding my execution. But I'm fairly sure they did it ironically."

"Adults feel a bit of ownership about it because they know the history of the show and so do children. Christmas is about spending time with people you love and this episode is so Christmas-y."

As Doctor Who tells Sardick at one pivotal moment in the episode: "Whatever happens tonight, remember, you brought it on yourself."

You won't regret bringing Doctor Who on yourself tonight. Rine in for the Canadian debut of this BBC special.