Dr. Who visits Mesa on schedule 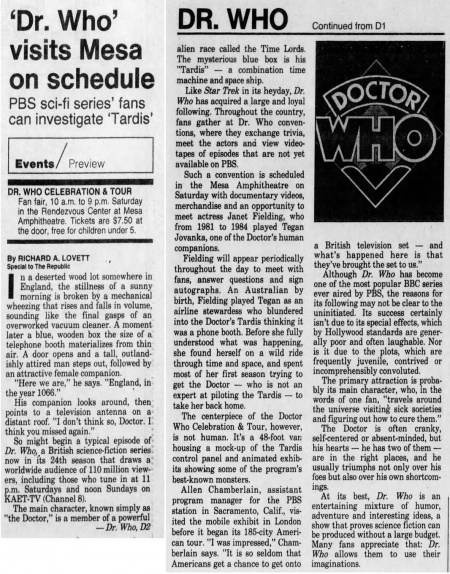 DR. WHO CELEBRATION & TOUR Fan fair, 10 a.m. to 9 p.m. Saturday in the Rendezvous Center at Mesa Amphitheatre. Tickets are $7.50 at the door, free for children under 5.

In a deserted wood lot somewhere in England, the stillness of a sunny morning is broken by a mechanical wheezing that rises and falls in volume, sounding like the final gasps of an overworked vacuum cleaner. A moment later a blue, wooden box the size of a telephone booth materializes from thin air. A door opens and a tall, outlandishly attired man steps out, followed by an attractive female companion.

His companion looks around, then points to a television antenna on a distant roof. "I don't think so, Doctor. I think you missed again."

So might begin a typical episode of Dr. Who, a British science-fiction series now in its 24th season that draws a worldwide audience of 110 million viewers, including those who tune in at 11 p.m. Saturdays and noon Sundays on KAET-TV (Channel 8).

The main character, known simply as "the Doctor," is a member of a powerful alien race called the Time Lords. The mysterious blue box is his "Tardis" — a combination time machine and space ship.

Like Star Trek in its heyday, Dr. Who has acquired a large and loyal following. Throughout the country, fans gather at Dr. Who conventions, where they exchange trivia, meet the actors and view videotapes of episodes that are not yet available on PBS.

Such a convention is scheduled in the Mesa Amphitheatre on Saturday with documentary videos, merchandise and an opportunity to meet actress Janet Fielding, who from 1981 to 1984 played Tegan Jovanka, one of the Doctor's human companions.

Fielding will appear periodically throughout the day to meet with fans, answer questions and sign autographs. An Australian by birth, Fielding played Tegan as an airline stewardess who blundered into the Doctor's Tardis thinking it was a phone booth. Before she fully understood what was happening, she found herself on a wild ride through time and space, and spent most of her first season trying to get the Doctor — who is not an expert at piloting the Tardis — to take her back home.

The centerpiece of the Doctor Who Celebration & Tour, however, is not human. It's a 48-foot van housing a mock-up of the Tardis control panel and animated exhibits showing some of the program's best-known monsters.

Allen Chamberlain, assistant program manager for the PBS station in Sacramento, Calif., visited the mobile exhibit in London before it began its 185-city American tour. "I was impressed," Chamberlain says. "It is so seldom that Americans get a chance to get onto a British television set — and what's happened here is that they've brought the set to us."

Although Dr. Who has become one of the most popular BBC series ever aired by PBS, the reasons for its following may not be clear to the uninitiated. Its success certainly isn't due to its special effects, which by Hollywood standards are generally poor and often laughable. Nor is it due to the plots, which are frequently juvenile, contrived or incomprehensibly convoluted.

The primary attraction is probably its main character, who, in the words of one fan, "travels around the universe visiting sick societies and figuring out how to cure them."

The Doctor is often cranky, self-centered or absent-minded, but his hearts — he has two of them — are in the right places, and he usually triumphs not only over his foes but also over his own shortcomings.

At its best, Dr. Who is an entertaining mixture of humor, adventure and interesting ideas, a show that proves science fiction can be produced without a large budget. Many fans appreciate that: Dr. Who allows them to use their imaginations.