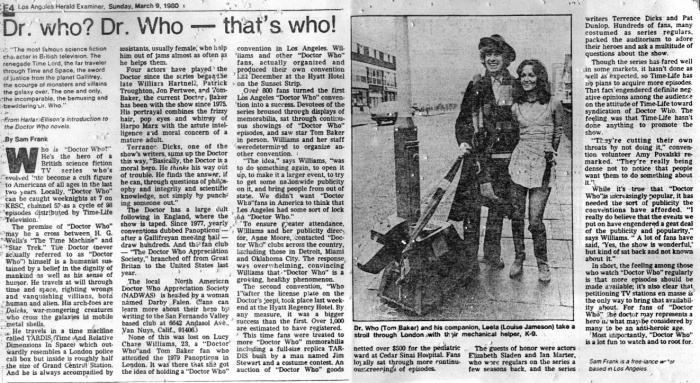 "The most famous science fiction character in British television. The renegade Time Lord, the far traveler through Time and Space, the sword of justice from the planet Gallifrey, the scourge of monsters and villains the galaxy over. The one and only, the incomparable, the bemusing and bewildering Dr. Who."

From Harlan Ellison's introduction to the Doctor Who novels

Who is "Doctor Who?" He's the hero of a British science fiction TV series who's evolved into become a cult figure to Americans of all ages in the last two years. Locally, "Doctor Who" can be caught weeknights at 7 on KBSC, channel 57 as a cycle of 98 episodes distributed by Time-Life Television.

The premise of "Doctor Who" may be a cross between H.G. Wells's "The Time Machine" and "Star Trek." The Doctor (never actually referred to as "Doctor Who") himself is a humanist sustained by a belief in the dignity of mankind is well as his sense of humor. He travels at will through time and space, righting wrongs and vanquishing villians, both human and alien. His arch-foes are Daleks, war-mongering creatures who cross the galaxies in mobile metal shells.

He travels in a time machine called TARDIS (Time And Relative Dimensions In Space) which outwardly resembles a London police call box but inside is roughly half the size of Grand Central Station. And he is always accompanied by assistants, usually female, who help him out of jams almost as often as he helps them.

Four actors have played the Doctor since the series began, the late William Hartnell, Patrick Troughton, Jon Pertwee, and Tom-Baker, the current Doctor. Baker has been with the show since 1975. His portrayal combines the frizzy hair, pop eyes and whimsy of Harpo Marx with the astute intelligence aid moral concern of a mature adult.

Terrance Dicks, one of the show's writers, sums up the Doctor this way, "Basically, the Doctor is a moral hero. He thinks his way out of trouble. He finds the answer, if he can, through questions of philosophy and integrity and scientific knowledge, not simply by punching someone out."

The Doctor has a large cult following in England where the show is taped. Since 1977, yearly conventions dubbed Panopticon after a Gallifreyan meeting hall — draw hundreds. And the fan club — The Doctor Who Appreciation Society," branched off from Great Britain to the United States last year.

The local North American Doctor Who Appreciation Society (NADWAS) is headed by a woman named Darby Falen. (Fans can learn more about their hero by writing to the San Fernando Valley based club at 6642 Andasol Ave., Van Nuys. Calif., 91406.)

None of this was lost on Lucy Chase Williams, 23, a "Doctor' Who" and Tom Baker fan who attended the 1979 Panopticon in London. It was there that she got the idea of holding a "Doctor Who" convention in Los Angeles. Williams and other "Doctor Who" fans, actually organized and produced their own convention last December at the Hyatt Hotel on the Sunset Strip.

Over 800 fans turned the first Los Angeles "Doctor Who" convention into a success. Devotees of the series browsed through displays of memorabilia, sat through continuous showings of "Doctor Who" episodes, and saw star Tom Baker in person. Williams and her staff were determined to organize another convention.

"The idea," says Williams, was to do something again, to open it up, to make it a larger event, to try to get some nationwide publicity on it, and bring people from out of state. We didn't want "Doctor Who" fans in America to think that Los Angeles had some sort of lock on "Doctor Who."

To ensure greater attendance, Williams and her publicity director, Anne Moore, contacted "Doctor Who" clubs across the country, including those in Detroit, Miami and Oklahoma City. The response was overwhelming, convincing Williams that "Doctor Who" is a growing, healthy phenomenon.

The second convention, "Who 1" (after the license plate on the Doctor's jeep), took place last weekend at the Hyatt Regency Hotel. By any measure, it was a bigger success than the first. Over 1,000 are estimated to have registered.

This time fans were treated to more "Doctor Who" memorabilia including a full-size replica TARDIS built by a man named Jim Stewart and a costume contest. An auction of "Doctor Who" goods netted over $500 for the pediatric ward at Cedar Sinai Hospital. Fans loyally sat through more continuous episodes. The guests of honor were actors Elizabeth Sladen and Ian Marter, who were regulars on the series few seasons back, and writers Terrence Dicks and Pat Dunlop. Hundreds of fans, many costumed as series regulars, packed the auditorium to adore their heroes and ask a multitude of questions about the show.

Though the series has fared well in some markets, it hasn't done as well as expected, so Time-Life has no plans to acquire more episodes. That fact engendered definite negative opinions among the audience on the attitude of Time-Life toward syndication of Doctor Who. The feeling was that Time-Life hasn't done anything to promote the show.

"They're cutting their own throats by not doing it," convention volunteer Amy Povalski remarked. "They're really being dense not to notice that people want them to do something about it."

While it's true that "Doctor Who is increasingly popular, it has needed the sort of publicity the conventions have afforded. "I really do believe that the events we put on have engendered a geat deal of the publicity and popularity," says Williams." A lot of fans have said, 'Yes, the show is wonderful,' but kind of sat back and not known about it."

In short, the feeling among those who watch "Doctor Who" regularly is that more episodes should be made available; it's also clear that petitioning TV stations en masse is the only way to bring that availability shout. For fans of "Doctor Who" the doctor may represents a hero in what may be considered by many to be an anti-heroic age.

Most importantly, "Doctor Who" is a lot fun to watch and to root for.

Caption: Dr. Who (Tom Baker) and his companion, Leela (Louise Jameson) take a stroll through London with their mechanical helper, K-9.