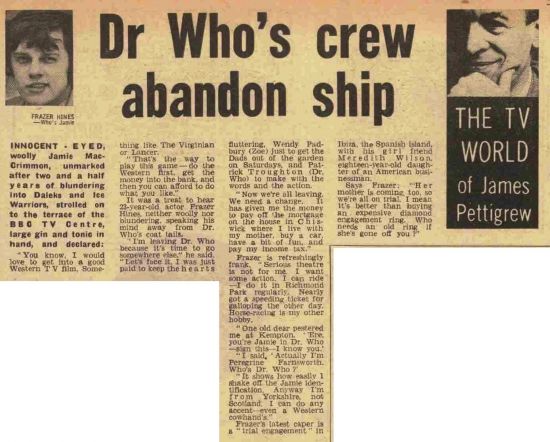 INNOCENT-EYED, woolly Jamie MacCrimmon, unmarked after two and a half years of blundering into Daleks and Ice Warriors, strolled on to the terrace of the BBC TV Centre, large gin and tonic in hand, and declared: "You know. I would love to get Into a good Western TV film. Something like The Virginian or Lancer.

That's the way to play this game — do the Western first, get the money into the bank, and then you can afford to do what you like."

It was a treat to hear 23-year-old actor Frazer Hines, neither woolly nor blundering, speaking his mind away from Dr. Who's coat tails.

"I'm leaving Dr. Who because it's time to go somewhere else," he said. "Let's face it, I was just paid to keep the hearts fluttering, Wendy Padbury (Zoe) just to get the Dads out of the garden on Saturdays, and Patrick Troughton (Dr. Who) to make with the words and the action.

"Now we're all leaving. We need a change. It has given me the money to pay off the mortgage on the house in Chiswick where I live with my mother, buy a car, have a bit Of fun, and pay any income tax."

Frazer is refreshingly frank. "Serious theatre is not for me. I want some action. I can ride — I do it in Richmond Park regularly. Nearly got a speeding ticket for galloping, the other day. Horse-racing is my other hobby.

"I said, 'Actually I'm Peregrine Farnsworth. Who's Dr. Who?'

"It shows how easily I shake off the Jamie identification. Anyway I'm from Yorkshire, not Scotland. I can do any accent — even a Western cowhand's."

Fraser's latest caper is a "trial engagement" in Ibiza. the Spanish island, with his girl friend Meredith Wilson, eighteen-year-old daughter of an American businessman.

Says Fraser, "Her mother is coming too so we're all on trial. I mean It's better than buying an expensive diamond engagement ring. Who needs an old ring if she's gone off you?"