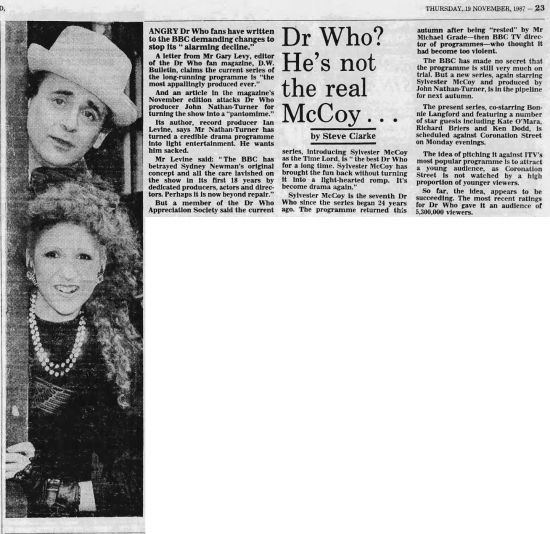 ANGRY Dr Who fans have written to the BBC demanding changes to stop its " alarming decline."

A letter from Mr Gary Levy, editor of the Dr Who fan magazine, D.W. Bulletin, claims the current series of the long-running programme is "the most appallingly produced ever."

And an article in the magazine's November edition attacks Dr Who producer John Nathan-Turner for turning the show into a "pantomime."

Mr Levine said: The BBC has betrayed Sydney Newman's original concept and all the care lavished on the show in its first 18 years by dedicated producers, actors and directors. Perhaps it is now beyond repair."

But a member of the Dr Who Appreciation Society said the current series, introducing Sylvester McCoy as the Time Lord, is "the best Dr Who for a long time. Sylvester McCoy has brought the fun back without turning it into a light-hearted romp. It's become drama again."

Sylvester McCoy is the seventh Dr Who since the series began 24 years ago. The programme returned this autumn after being "rested" by Mr Michael Grade—then BBC TV director of programmes—who thought it had become too violent.

The BBC has made no secret that the programme is still very much on trial. But a new series, again starring Sylvester McCoy and produced by John Nathan-Turner, is in the pipeline for next autumn.

The present series, co-starring Bonnie Langford and featuring a number of star guests including Kate O'Mara, Richard Briers and Ken Dodd, is scheduled against Coronation Street on Monday evenings.

The idea of pitching it against ITV's most popular programme is to attract a young audience, as Coronation Street is not watched by a high proportion of younger viewers.

So far, the idea, appears to be succeeding. The most recent ratings for Dr Who gave it an audience of 5,300,000 viewers.