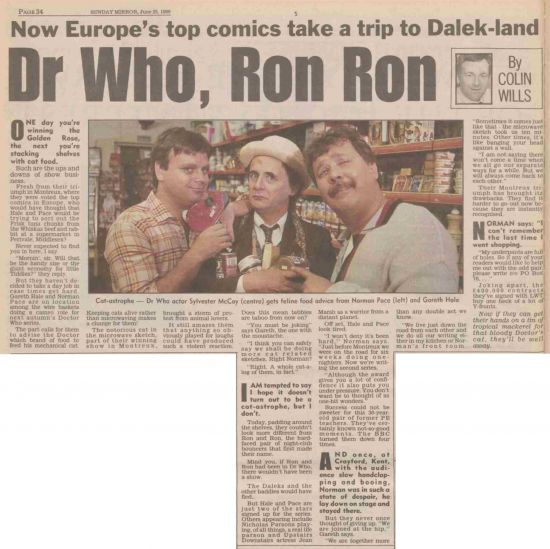 ONE day you're winning the Golden Rose, the next you're stacking shelves with cat food.

Such are the ups and downs of show business.

Fresh from their triumph in Montreux, where they were voted the top comics In Europe. who would have thought that Hale and Pace would be trying to sort out the Frisk tuna chunks from the Whiskas beef and rabbit at a supermarket in Perivale. Middlesex?

Never expected to find you in here, I say.

"Mornin', sir Will that be the handy size or the giant economy for little Tiddles?" they reply.

But they haven't decided to take a day job in case times get hard. Gareth Hale and Norman Pace are on location among the wire baskets doing a cameo role for next autumn's Doctor Who series.

The part calls for them to advise the Doctor which brand of food to feed his mechanical cat. Keeping cats alive rather than microwaving makes a change for them!

The notorious cat in the microwave sketch, part of their winning show in Montreux, brought a storm of protest from animal lovers.

It still amazes them that anything so obviously played for laughs could have produced such a violent reaction.

Does this mean tabbies are taboo from now on?

"You must be joking" says Gareth, the one with the moustache.

"I think you can safely say we shall be doing more cat related sketches. Right Norman?

I AM tempted to say I hope it doesn't turn out to be a cat-astrophe, but I don't.

Today, padding around the shelves, they couldn't look more different from Ron and Ron. the hard-faced pair of night-club bouncers that first made their name.

Mind you, if Ron and Ron had been in Dr Who, there wouldn't have been a show

The Daleks and the other baddies would have fled.

But Hale and Pace are Just two of tile stars signed up for the series. Others appearing include Nicholas Parsons playing, of all things, a real life parson arid Upstairs Downstairs actress Jean Marsh as a warrior from a distant planet.

"I won't deny it's been hard." Norman says. "Just before Montreux we were on the road for six weeks doing one-fighters. Now we're writing the second series.

"Although the award gives you a lot of confidence it also puts you under pressure. You don't want be to thought of as one-hit wonders.

Success could not be sweeter for this 36-year-old pair of former PE teachers. They've certainly known not-so-good moments. The BBC turned them down four times.

AND once, of Crayford, Kent, with the audience slow handclap-ping and booing, Norman was in such a state of despair, he lay down on stage and stayed there.

But they never once thought of giving up. "We are joined at the hip." Gareth says.

"We are together more than any double act we know.

"We Live just down the road from each other and we do all our writing either In my kitchen or Norman's front room.

Sometimes it comes just like that - the microwave sketch took us ten minutes. Other times, it's like banging your head against a wall.

"I am not saying there won't come a time when we all go our separate ways for a while. But we will always come back to each other."

Their Montreux triumph has brought its drawbacks. They and it harder to go out now because they are instantly recognised.

"My underpants are full of holes. So if any of your readers would like to help me out with the odd pair. please write c/o PO 76 ...."

Joking apart, the £400.000 contracts they've signed with LWT buy one heck of a lot of Y-fronts.

Now if they can get their hands on a tin of tropical mackerel for that bloody Doctor's cat, they'll be well away.