Dr Who — Return of the Lord of Time 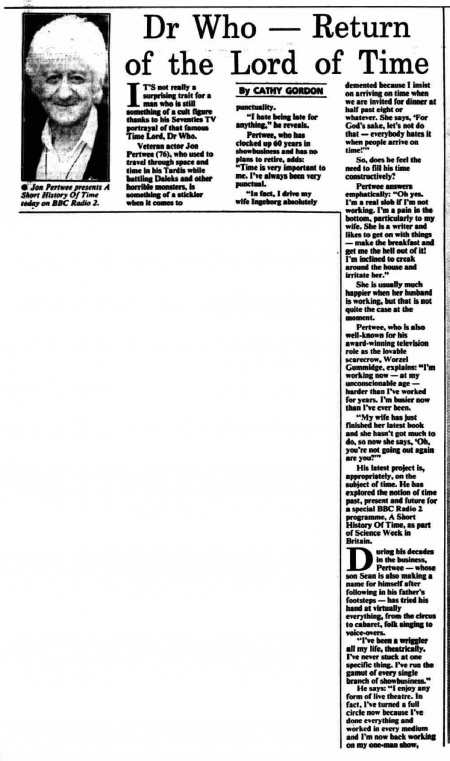 Veteran actor Jon Pertwee (76), who used to travel through space and time in his Tardis while battling Daleks and other horrible monsters, is something of a stickler when it comes to punctuality.

"I hate being late for anything, he reveals.

Pertwee who has clocked up 60 years in showbusiness has no plans to retire, adds: "Time is very important to me. I've always been very punctual."

"In fact, I drive my wife Ingeborg absolutely demented because I insist on arriving on time when we are invited for dinner at half past eight or whatever. She says, 'For God's sake, let's not do that — everybody hates it when people arrive on time!'"

So, does he feel the need to fill his time constructively?

Pertwee answers emphatically: 'Oh yes. I'm a real slob If I'm not working. I'm a pain in the bottom, particularly to my wile. She is a writer and likes to get on with things — make the breakfast and get me the hell out of it! In inclined to creak around the house and irritate her."

She is usually much happier when her husband is working, but that is not quite the case at the moment.

Pertwee, who is also well-known for his awards-winning television role as the lovable scarecrow, Worzel Gummidge, explains: "I'm working now — at my unconscionable age — harder than I've worked for years. I'm busier now that I've ever been.

"My wife has just finished her latest book and he hasn't got much to, so now she says, 'Oh, you're not going out again are you?'"

His latest project is, appropriately, on the subject of time. He has explored the nation of time past, present and future for a special BBC Radio 1 programme, A Short History Of Time... part of Science Week In Britain.

During his decodes in the business, Pertwee — whose son Sean is also making name for himself after following in his father's footsteps — has tried his hand at virtually everything, from the circus to cabaret, folk singing to voice-overs.

He says: "I enjoy any form of live theatre. In fact, I've turned a full circle now because I've done everything and worked in every medium and I'm now back working on my one-man show.