Dr Who Back in Action 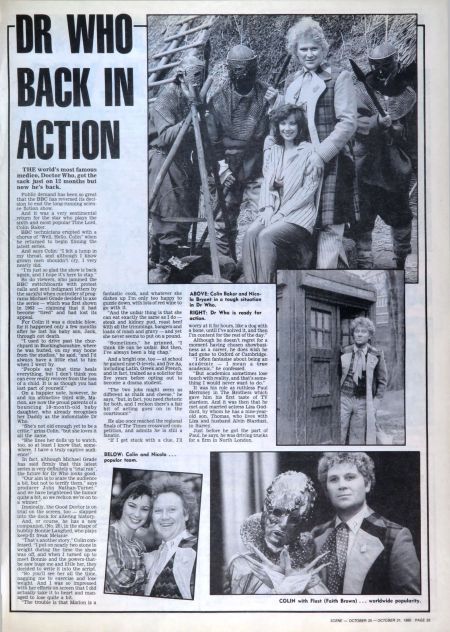 THE world's most famous medico, Doctor Who, got the sack just on 12 months but now he's back.

Public demand has been so great that the BBC has reversed its decision to end the long-running science fiction show.

And it was a very sentimental return for the star who plays the sixth and most popular Time Lord, Colin Baker.

BBC technicians erupted with a chorus of "Well, Hello, Colin" when he returned to begin filming the latest series.

And says Colin: "I felt a lump in my throat, and although I know grown men shouldn't cry, I very nearly did.

"I'm just so glad the show is back again, and I hope it's here to stay."

So do viewers, who jammed the BBC switchboards with protest calls and sent indignant letters by the sackful when controller of programs Michael Grade decided to axe the series — which was first shown in 1963 — claiming that it had become "tired" and had lost its appeal.

For Colin it was a double blow, for it happened only a few months after he lost his baby son, Jack, through cot death.

"I used to drive past the churchyard in Buckinghamshire, where he was buried, on my way home from the studios," he said, "and I'd always have a little chat to him when I went by.

"People say that time heals everything, but I don't think you can ever really recover from the loss of a child. It is as though you had lost part of yourself."

On a happier note, however, he and his attractive third wife, Marion, are now the proud parents of a bouncing 19-month-old baby daughter, who already recognises her Daddy as the indomitable Dr Who.

"She's not old enough yet to be a critic," grins Colin, "but she loves it all the same.

"She lines her dolls up to watch, too, so at least I know that, somewhere, I have a truly captive audience!"

In fact, although Michael Grade has said firmly that this latest series is very definitely a "trial run", the future for Dr Who looks good.

"Our aim is to scare the audience a bit, but not to terrify them," says producer John Nathan-Turner," and we have heightened the humor quite a bit, so we reckon we're on to a winner."

Ironically, the Good Doctor is on trial on the screen, too — slapped into the dock for altering history.

And, or course, he has a new companion, (No. 26), in the shape of bubbly Bonnie Langford, who plays keep-fit freak Melanie.

"That's another story," Colin confessed. "I put on nearly two stone in weight during the time the show was off, and when I turned up to meet Bonnie and the powers-that-be saw huge me and little her, they decided to write it into the script.

"So you'll see her all the time, nagging me to exercise and lose weight. And I was so impressed with her efforts on screen that I did actually take it to heart and managed to lose quite a bit.

"The trouble is that Marion is a fantastic cook, and whatever she dishes up I'm only too happy to guzzle down, with lots of red wine to go with it.

"And the unfair thing is that she can eat exactly the same as I do — steak and kidney pud, roast beef with all the trimmings, bangers and loads of mash and gravy — and yet she never seems to put on a pound.

"Sometimes," he grinned, "I think life can be unfair. But then, I've always been a big chap."

And a bright one, too — at school he gained nine O-levels, and five As, including Latin, Greek and French, and in fact, trained as a solicitor for five years before opting out to become a drama student.

"The two jobs might seem as different as chalk and cheese," he says, "but, in fact, you need rhetoric for both, and I reckon there's a fair bit of acting goes on in the courtroom!"

He also once reached the regional finals of The Times crossword competition, and admits he is still a fanatic.

"If I get stuck with a clue, I'll worry at it for hours, like a dog with a bone, until I've solved it, and then I'm content for the rest of the day."

Although he doesn't regret for a moment having chosen showbusiness as a career, he does wish he had gone to Oxford or Cambridge.

"I often fantasise about being an academic — I mean a true academic," he confessed.

"But academics sometimes lose touch with reality, and that's something I would never want to do."

It was his role as ruthless Paul Merroney in The Brothers which gave him his first taste of TV stardom. And it was then that he met and married actress Liza Goddard, by whom he has a nine-year-old son, Thomas, who lives with Liza and husband Alvin Stardust, in Surrey.

Just before he got the part of Paul, he says, he was driving trucks for a firm in North London.

BELOW: Colin and Nicola ... popular team.

ABOVE: Colin Baker and Nicola Bryant in a tough situation in Dr Who.

RIGHT: Dr Who is ready for action.