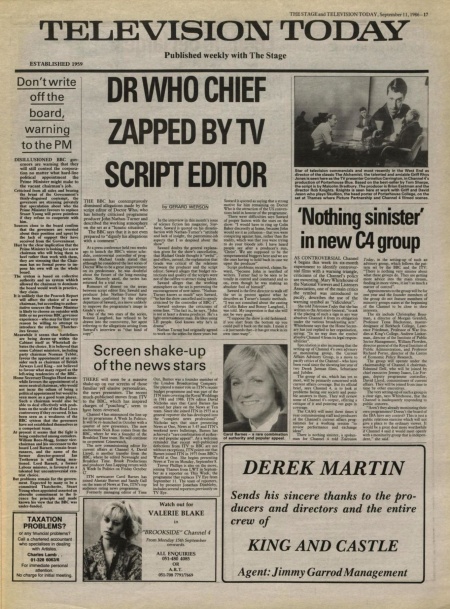 THE BBC has contemptuously dismissed allegations made by the script editor of Doctor Who, who has bitterly criticised programme producer John Nathan-Turner and described the working atmosphere on the net as a "lunatic situation". The BBC says that it is not even prepared to "dignify his allegations with a comment".

At a press conference held two weeks ago to launch the BBC's winter schedule, controversial controller of programmes Michael Grade stated that although he considered the last series of Doctor Who to be a great improvement on its predecessor, he was doubtful about the future of the long-running series. Recently axed, the series has returned for a trial run.

Rumours of dissent on the series between script editor Eric Saward and producer John Nathan-Turner have now been confirmed by the abrupt departure of Saward, in a move unlikely to improve the programme's image in Grade's eyes.

One of the two stars of the series, Bonnie Langford, has refused to be drawn into the controversy, her agent referring to the allegations arising from Saward's interview as "that kind of copy".

In the interview in this month's issue of science fiction fan magazine, Starburst, Saward is quoted on his dissatisfaction with Nathan-Turner's "attitude and lack of insight, the pantomime-ish aspects that I so despised about the show".

Saward doubts the general explanation given for the show's cancellation, that Michael Grade thought it "awful", and offers, instead, the explanation that Grade was critical of the relations between the producer and the script editor. Saward alleges that budget restrictions and quality of the scripts were not of the calibre to attract rising talent. Saward alleges that the working atmosphere on the set is preventing the encouragement of new talent. "Nathan-Turner knows so much" says Saward, he has the show cancelled and is openly criticised by the controller of BBC-1". Saward endorses the criticisms of some fans. "The fact it he says, "John is not at heart a drama producer. He's a light entertainment man. He likes using LE people. God knows why he's in drama".

Nathan Turner had originally agreed to work on the series for three years but Saward is quoted as saying that a strong motive for him remaining on Doctor Who is the attraction of the US conventions held in honour of the programme. There were difficulties says Saward of proper liaison with the stars on the show: "I would have to ring up Colin Baker discreetly at home, because John would see it as collusion - that you were conspiring against him, rather than the reality, which was that you were trying to do your bloody job. I have heard people say after a producer's run, 'Christ'. We are supposed to be the temperamental buggers here and we are the ones having to hold back in case we upset the producer".

Script problems recurred, claims Saward, "because John is terrified of writers. Turner had to be seen to be totally in control and command and so on, even though he was making an absolute fool of himself".

Saward is the first director to walk off the set in protest against what he describes as Turner's lunatic methods. "I was not consulted about the casting of Colin Baker and Bonny Langford, I was told. My impression is that she will not be very good.

"I suppose the show is old fashioned. if you start from the bottom up you could pull it back on the rails. I mean it - it just needs that - it has got stuck in its own time-warp".