Dr Who and a succession of delightful monsters 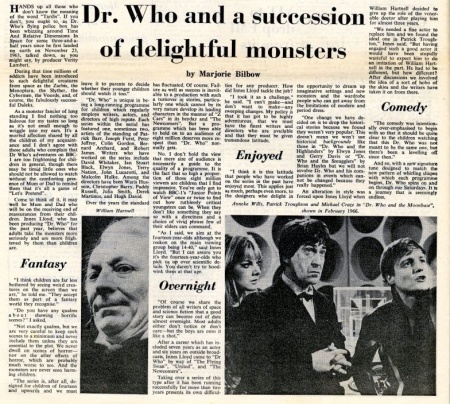 Hands up all those who don't know the meaning of the word "Tardis". If you don't, you ought to, as Dr. Who's flying police box has been whizzing around Time And Relative Dimensions In Space for some three-and-a-half years since he first landed on earth on November 23, 1963, talked down, as you might say, by producer Verity Lambert.

During that time millions of addicts have been introduced to such delightful creatures from space as the Zarbis, the Menoptera, the Slyther, the Cybermen, the Voords, and, of the fabulously successful Daleks.

As a monster fancier of long standing I find nothing too hideous for my tastes so long as it's not small enough to wriggle into my ears. It's a morbid affection shared by all the children of my acquaintance and I don't agree with those adults who complain that Dr. Who's adventures on BBC-1 are too frightening for children in general, though there may be timid little ones who should not be allowed to watch without the comforting presence of Mum or Dad to remind them that it's all a game of "Let's Pretend."

Come to think of it, it may well be Mum and Dad who will be on the receiving end of reassurance from their children. Innes Lloyd, who has been producing "Dr. Who" for the past year, believes that adults take the monsters more seriously and are more frightened by them than children are.

"I think children are far less bothered by seeing weird creatures on the screen than we are." he told me, "They accept them as part of a fantasy world they recognise."

"Do you have any qualms about showing horrific scenes?" I asked.

"Not exactly qualms, but we are very careful to keep such scenes to a minimum and never include them unless they are essential to the plot. We never dwell on scenes of horrors the after effects of horror, which are probably much worse to see. And the monsters are never seen harming children.

"The series is, after all, designed for children of fourteen and upwards and we must leave it to parents to decide whether their younger children should watch it too."

"Dr. Who" is unique in being a long-running programme for children which regularly employs writers, actors, and directors of high repute. Each series within the serial has featured one, sometimes two, artists of the standing of Patrick Barr, Joseph Furst, Peter Jeffrey, Colin Gordon, Bernard Archard, and Robert James. Writers who have worked on the series include David Whitaker, Ian Stuart Black, Elwyn Jones, Terry Nation, John Lucarotti, and Malcolm Hulke. Among the directors have been Wares Hussein, Christopher Barry, Paddy Russell, Julia Smith, Derek Martins, and Hugh David.

Over the years the standard has fluctuated. Of course. Failure as well as success in inevitable to a production with such a turnover in stories, particularly one which cannot by its very nature develop its leading characters in the manner of "Z Cars" in its heyday and "The Newcomers." But a programme which has been able to hold on to an audience of eight million deserves more respect than "Dr. Who" normally gets.

No. I don't hold the view that mere size of audience is necessarily a guide to the quality of the programme. It is the fact that so high a proportion of those eight million viewers and children that I find impressive. You've only got to watch BBC-1's "Junior Points of View" once or twice to find out how ruthlessly critical youngsters cats be. When they don't like something they say so with a directness and choice of vivid phrase few of their elders can command.

"Of course we share the problem of all writers of space and science fiction that a good story can become out of date almost overnight. Most adults either don't notice or don't care—but the boys are onto it like a shot."

After a career which has included seven years as an actor and six years on outside broadcasts, Inner Lloyd cams to "Dr Who" by way of "The Flying Swan", "United", and "The Newcomers".

Taking over a series of this type after it has been running successfully for more than two years presents its own difficulties for any producer. How did Innes Lloyd tackle the job?

"I took it as a challenge," he said. "I can't make—and don't want to make—any sweeping changes. My policy is that it has got to be highly adventurous, that we must have the finest writers and directors who are available and that they must be given tremendous latitude.

"I think it is this latitude that people who have worked on the series in the past have enjoyed most. This applies just as much, perhaps even more, to the designers who delight in the opportunity to dream up imaginative settings and new monsters and the wardrobe people who can get away from the limitations of modern and period dress.

"One change we have decided on is to drop the historical stories because we found they weren't very popular. This doesn't mean we won't use historical backgrounds like those in "Dr. Who and the Highlanders" by Elwyn Jones and Gerry Davis or "Dr. Who and the Smugglers" by Brian Hayles, but we will not involve Dr. Who and his companions in events which cannot be changed because they really happened."

An alteration in style was forced upon Innes Lloyd when William Hartnell decided to give up the role of the venerable doctor after playing for almost three years.

"We needed a fine actor to replace him and we found the ideal one in Patrick Troughton," Innes said. "But having engaged such a good actor it would have been stupidly wasteful to expect him to do an imitation of William Hartnell in the part. He had to be different, but how different? After discussions we involved the idea of a sort of hobo of the skies and the writers have taken it on from there.

"The comedy was intentionally over-emphasised to begin with so that it should be quite clear to the children watching that this Dr. who was not meant to be the same one, but there's a levelling off since then."

And so, with a new signature tune designed to match the new pattern of whirling shapes with which each programme begins, Dr. Who spins on and on through our Saturdays. It is a journey that is seeming endless.

Caption: Anneke Wills, Patrick Troughton and Michael Craze in "Dr. Who and the Moonbase", shown in February 1966.