Dr Who and the Daleks/Daleks' Invasion Earth 2150AD 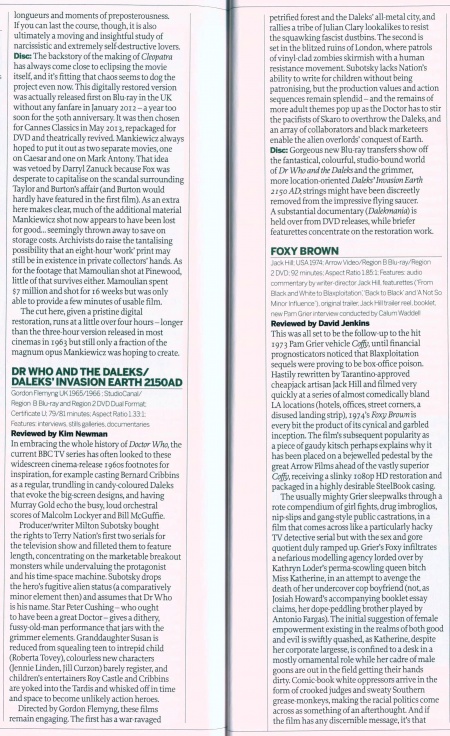 In embracing the whole history of Doctor Who, the current BBC TV series has often looked to these widescreen cinema-release 196os footnotes for inspiration, for example casting Bernard Cribbins as a regular, trundling in candy-coloured Daleks that evoke the big-screen designs, and having Murray Gold echo the busy, loud orchestral scores of Malcolm Lockyer and Bill McGuffie.

Producer/writer Milton Subotsky bought the rights to Terry Nation's first two serials for the television show and filleted them to feature length, concentrating on the marketable breakout monsters while undervaluing the protagonist and his time-space machine. Subotsky drops the hero's fugitive alien status (a comparatively minor element then) and assumes that Dr Who is his name. Star Peter Cushing—who ought to have been a great Doctor— gives a dithery, fussy-old-man performance that jars with the grimmer elements. Granddaughter Susan is reduced from squealing teen to intrepid child (Roberta Tovey), colourless new characters (Jennie Linden, Jill Curzon) barely register, and children's entertainers Roy Castle and Cribbins are yoked into the Tardis and whisked off in time and space to become unlikely action heroes.

Directed by Gordon Plemyng, these films remain engaging. The first has a war-ravaged petrified forest and the Daleks' all-metal city, and rallies a tribe of Julian Clary lookalikes to resist the squawking fascist dustbins. The second is set in the blitzed ruins of London, where patrols of vinyl-clad zombies skirmish with a human resistance movement Subotsky lacks Nation's ability to write for children without being patronising, but the production values and action sequences remain splendid — and the remains of more adult themes pop up as the Doctor has to stir the pacifists of Skaro to overthrow the Daleks, and an array of collaborators and black marketeers enable the alien overlords' conquest of Earth.

Disc Gorgeous new Blu-ray transfers show off the fantastical, colourful, studio-bound world of Dr Who and the Daleks and the grimmer, more location-oriented Daleks' Invasion Earth 2150 AD, strings might have been discreetly removed from the impressive flying saucer. A substantial documentary (Dalekmania) is held over from DVD releases, while briefer featurettes concentrate on the restoration work.