Dr Who meets the Clichés 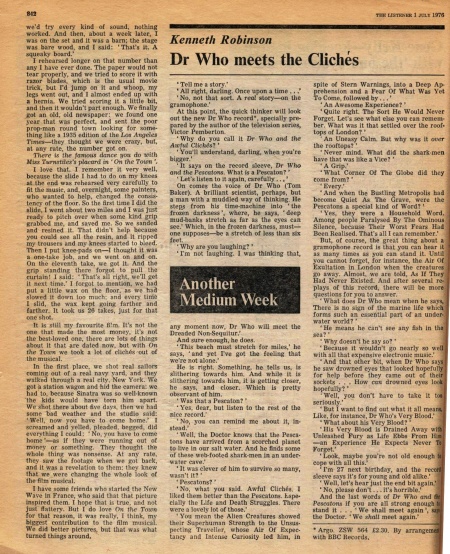 No, not that sort. A real story—on the gramophone.'

At this point, the quick thinker will look out the new Dr Who record*, specially prepared by the author of the television series, Victor Pemberton.

'Why do you call it Dr Who and the Awful Clichés?'

'You'll understand, darling, when you're bigger.'

'It says on the record sleeve, Dr Who and the Pescatons. What is a Pescaton? '

On comes the voice of Dr Who (Tom Baker). A brilliant scientist, perhaps, but a man with a muddled way of thinking. He steps from his time-machine into ' the frozen darkness ', where, he says, ' deep mud-banks stretch as far as the eyes can see.' Which, in the frozen darkness, must—one supposes—be a stretch of less than six feet.

'Why are you laughing?'

'I'm not laughing. I was thinking that, any moment now, Dr Who will meet the Dreaded Non-Sequitur.'

And sure enough, he does.

'This beach must stretch for miles,' he says, 'and yet I've got the feeling that we're not alone.'

'Yes, dear, but listen to the rest of the nice record.'

'No, you can remind me about it, instead.'

' Well, the Doctor knows that the Pescatons have arrived from a scorched planet to live in our salt water. And he finds some of these web-footed shark-men in an underwater cave.'

'It was clever of him to survive so many, wasn't it?'

'No, what you said. Awful Clichés. I liked them better than the Pescatons. Especially the Life and Death Struggles. There were a lovely lot of those.'

'You mean the Alien Creatures showed their Superhuman Strength to the Unsuspecting Traveller, whose Air Of Expectancy and Intense Curiosity led him, in spite of Stern Warnings, into a Deep Apprehension and a Fear Of What Was Yet To Come, followed by ... '

'Quite right. The Sort He Would Never Forget. Let's see what else you can remember. What was it that settled over the roof tops of London?'

'An Uneasy Calm. But why was it over the rooftops?'

'Never mind. What did the shark-men have that was like a Vice?'

'What Corner Of The Globe did they come from?'

'And when the Bustling Metropolis had become Quiet As The Grave, were the Pescatons a special kind of Word?

'Yes, they were a Household Word. Among people Paralysed By The Ominous Silence, because Their Worst Fears Had Been Realised. That's all I can remember.'

But, of course, the great thing about a gramophone record is that you can hear it as many times as you can stand it. Until you cannot forget, for instance, the Air Of Exultation in London when the creatures go away. Almost, we are told, As If They Had Never Existed. And after several replays of this record, there will be more questions for you to answer.

'What does Dr Who mean when he says, There is no sign of the marine life which forms such an essential part of an underwater world?'

'He means he can't see any fish in the sea?'

'Because it wouldn't go nearly so well with all that expensive electronic music.'

'And that other bit, when Dr Who says he saw drowned eyes that looked hopefully for help before they came out of their sockets ... How can drowned eyes look hopefully?'

'Well, you don't have to take it too seriously.'

'But I want to find out what it all means, Like, for instance, Dr Who's Very Blood.' 'What about his Very Blood?'

'His Very Blood is Drained Away with Unleashed Fury as Life Ebbs From Him —an Experience He Expects Never To. Forget.'

'Look, maybe you're not old enough to cope with all this.'

'I'm 27 next birthday, and the record sleeve says it's for young and old alike.'